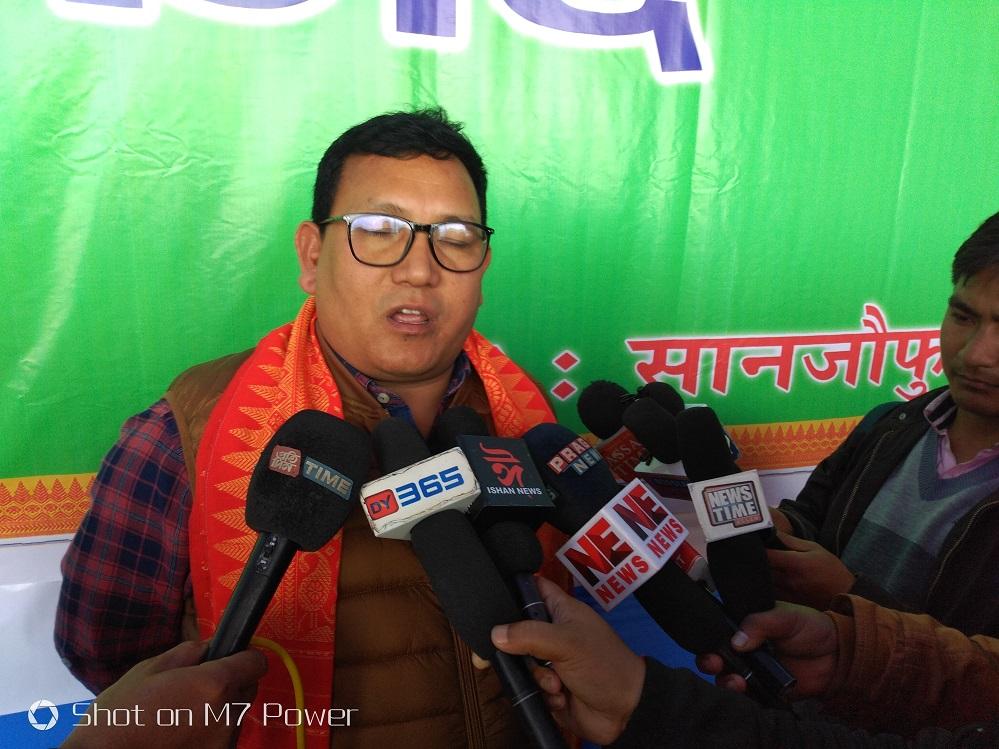 KOKRAJHAR: All Bodo Students Union (ABSU) has demanded state reorganisation commission in India to create smaller states across the country.

The students union urged upon BJP led NDA government to solve the Bodoland statehood issue through the political dialogue and bring a permanent peace in the region.

While talking exclusively with this Correspondent in a sidelines of the 52nd annual convention held Kanakeswar Narzary Jaorikhang Pwthar Serfangur on Monday in Kokrajhar,ABSU president Pramod Boro said that even though BJP led NDA government had promised to solve the Bodoland statehood issue,yet no good response and well gestures were arrived so far.He said that BJP party had enlisted the Bodoland statehood issue in their 2014 Parliamentary elections manifesto,but single initiative as well communication was reached out at this juncture.He said that Bodos are demanding separate Bodoland statehood since long five decades and hover tactically delayed the demands and issues of the Bodos.He has put demand to the government to take bold political initiative to make state reorganisation commission in India while creating new separate states in the country.He said that formation of state reorganisation commission in India will paving the way to create new separate states for bringing healthy and good governance across the country.

He said that students union has decided to urge upon the Government of India to resolve the issue without farther delay. Boro said that students union resolves to continue the vigorous mass movement if the government don’t take a policy decision at political level for permanent solution of the Bodoland issue at the earliest and also political right to the Bodos living outside the proposed Bodoland area and Hills Tribe status to the Bodos living in Karbi Anglong and Dima Hasao.

He has while heartily welcomes the cabinet decision of the Assam government for solution of Bodo issue and urges the state and central government to act accordingly for permanent peaceful solution. He,further has appealled to the Union government to take necessary initiative for early solution of Bodoland and its related issues as decided by the State Cabinet of Assam government.
He told that the students union has discussed on the armed revolutionary issue of Assam and northeastern states, has urged the government to expedite the peace talks in an earnest manner for an ever lasting peace in the region. He also demanded to take political initiative for meaningfully and mutually conclude the peaceful negotiation with all factions of Bodo armed revolutionary groups such as NDFB(P) & NDFB so as to usher an era of peace, harmony and development in the region.

In its annual convention,the students union has  resolved several eight points resolutions which are included urging the government of India to immediately resolve the separate state Bodoland issue through political dialogue,c carrying out the ongoing peace accord process with the armed revolutionary organizations expeditiously,solve the all pending issues of Bodo medium schools,colleges and universities before coming into force of national education policy 2019,make the Bodo language as one of the official language in Assam,rectify the imposition of Assamese language as compulsory subject in Assam.

Meanwhile,the the 52nd annual convention of the ABSU was concluded on Monday with three day colourful programme scheduled in Kokrajhar.

Former vice chancellor of Assam Agricultural University,Jorhat Prof Kamal Mallah Buzarbaruah graced as chief guest on the open session of the convention.Prof Buzarbaruah has lauded the initiatives taking by ABSU in bringing quality educational environment amongst the society and urged the citizens to be deducted to make healthy society.

Assam Assembly Speaker Hitendra Nath Goswami attended as special guest in the event.Goswami said that belief of superstition amongst the society must be eradicate to get healthy living.He has urged the students union to work towards the eradication of superstition(Daini belief), protection of women security and social upliftment.

He said that Bodos are son of soil and thus Bodo community must sustain with dedicated.

He has highlighting the sporting spirits of Bodo youths,said Bodo youths are coming up healthy space in sports which is marking the state's growth in the sports environment.

On the Bodo issues, Goswami has put assurance that he is sharing the message for taking initiative politically with chief minister Sarbananda Sonowal and government to make solution way in near future.

"I shall take bold step to make sure to solve the peace process of the Bodo issue.I shall share this issue with government",he added.

He has opined healthy integrity amongst all sections of communities in the state,he said that we all need integrity to facilitate development and welfare of the citizens.