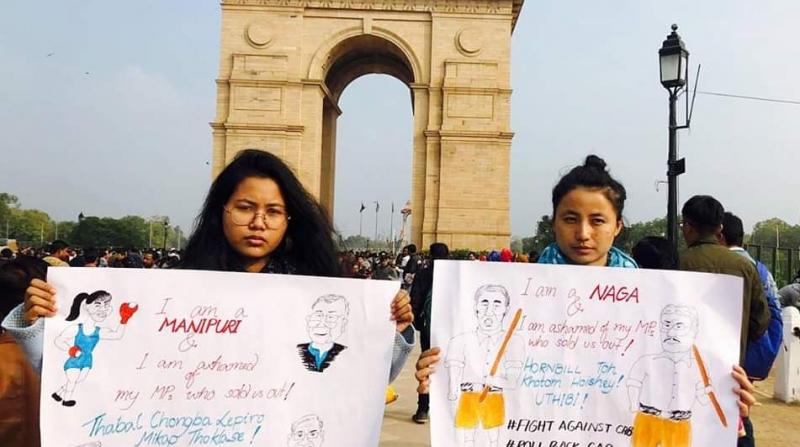 The Citizenship (Amendment) Act, 2019 that have been passed is not a matter that should be taken lightly it is a very serious issue that will clearly destroy us in the days to come. Citizenship Amendment Bill which is now an Act will reshape the whole of India but not in a good way. This Act is not only a direct threat to the fabric of Secularism but also the rights of indigenous people. No promise, No assurance and No legal/administrative measures from government can save us from the “irreversible change” that this unconstitutional, scary, communal Act will bring. This Citizenship Amendment Act, 2019 is going to create following troubles:

Moreover it is learned that maximum illegal immigrants who are out of NRC are Hindus (Reference: https://www.indiatoday.in). 19 Lakh is not a small a number. In Nagaland we have millions of Illegal Bangladeshi Immigrants, other states in the northeast too face more or less similar situation. Total number of Illegal Bangladeshi Immigrants will be much more than what we can ever imagine. Therefore, this matter of CAA is not that simple to understand.

As we all know that India is known for its diverse culture but this 'Citizenship Amendment Act', 2019 will clearly destroy the diversity of India. We all should know the critical condition that we are in right now and should take a stand if not now; then the Citizenship Amendment Act will become the root of all the problems that we will face in the later days to come. If we do not wake up and stand against and oppose it strongly in Constitutional way, then later it will become a Cancer and bring darker days not only to our generation but for our future generations also.

People from NorthEast participating in a protest against the Citizenship Amendment Act (CAA) in New Delhi.
All North East parties except SDF voted in favour of CAB in Rajya Sabha.#Nagaland #NewDelhi #CAA #CitizenshipAmendementAct #Assam pic.twitter.com/a6PQYwu6yz

Remember; peace and justice cannot be achieved just by sitting at our home and asking for it but instead it is fought. We the people (in general) have the bad habit of waiting for others to take a stand first then we fallow. Why? ("The question remain").This monstrous piece of legislation called as Citizenship Amendment Act, 2019 might not show its symptoms right now in Nagaland but mark my words, and I am bringing my words on record; that later it will surely do and when that does we will stand to lose our right to complain because it was us who did not take a stand at the first place. When entire India was exercising its constitutional right to protest we were waiting in line to stock up petrol. Why? Have WE forgotten our fighting spirit due to easy prosperity, money and little power? Where are our Civil Society Groups, Where are our Students organizations?

With UNITY our ancestors fought good battles in the past. We were undefeated. Our forefathers fought against every injustice with bravery. Now, the battlefields have been shifted, “Thoughts and Pen” has taken place of “Dao and Spear” and the “Constitution of India” has become our shield. If we are to keep quite now and see others suffering then later the problems will face toward us and when that happen imagine suffering without any comfort from other (it will be hell).If there is any hope for those who are suffering then be that hope be that ray of light in the life of those who are suffering and are already in the darkness. I beseech all of you to kindly exercise your Constitutional Rights under Article. 19, Article. 21, Article. 32, Article. 226/27  of the Constitution of India and save  Nagaland from the upcoming dark shadow of Citizenship Amendment Act, 2019.

1 Oct 2008 - 2:24pm | editor
The human rights violation cases in Assam has even reached international scene when the state’s lawyer and human rights activist and PCG spokesman Arup Borbora was participating the recent...