Koch-Rajbongshi organizations up in arms against self-styled leader 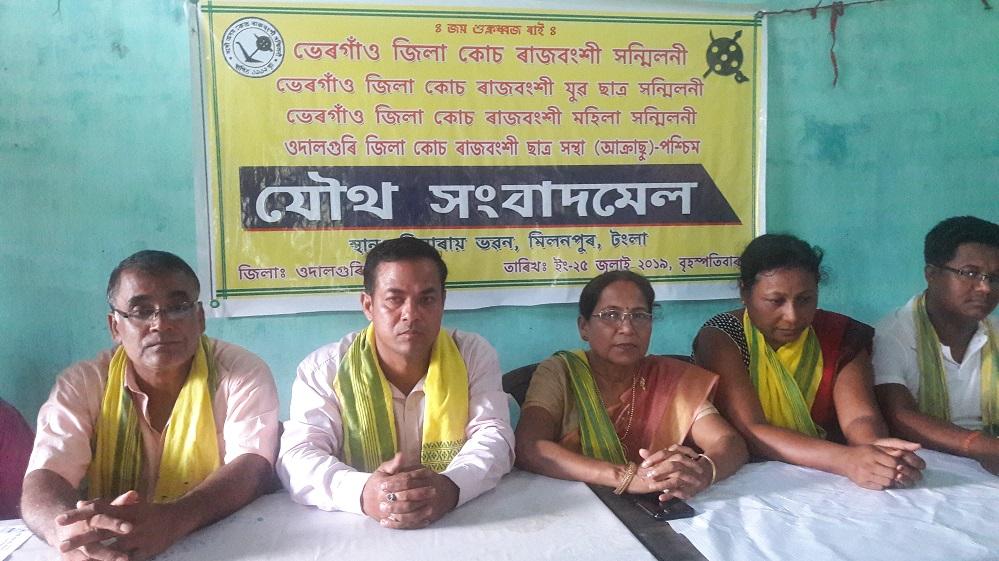 Putting an end to all controversies surrounding the President of Udalguri west chapter,All Koch Rajbongshi Students' Union (AKRSU), Hemanta Bora Koch regarding his affilation to Koch-Rajbongshi community the Bhergaon chapters of Koch-Rajbongshi Sanmilani; Mahila Sanmilani and Yuva Chatra Sanmilani and Udalguri west chapter AKRSU have termed it a baseless allegations and part of political conspiracy at a press conference at Chilarai Bhawan in Tangla of Udalguri district on Thursday.

Addressing the media, the Vice-President of AKRSU, Dibyajyoti Kumar Deka referring to the allegations by ousted student leader,Thaneswar Deka who is presently holding the post of President of Udalguri chapter, Koch Rajbongshi Sangram Samiti and have made comments in media and have written letter to Bhergaon SDO(C) for an enquiry into the family linkage and roots of Hemanta Bora Koch stated that Hemanta have been associated with the student organization holding various portfolios in local and district chapters for more than 15 years and he is a front-runner leader who has played pivotal role in addresding the issues plaguing the community.

"The Koch-Rajbongshi community has taken up the matter as a personal attack by an ousted self styled leader and the allegations are baseless and is just a personal vendetta" said Deka. He further stated whenever the struggle of the community to secure its rights reaches peak certain vested circles come up with such false allegations to demoralize the Koch-Rajbongshi people.

Bhergaon chapter,Koch-Rajbongshi Sanmilani President,Shiva Ram Deka said, " Such conspiracy by a self-styled leader will bear no fruits as the people of the community are united to fight for their rights." Moreover referring to the allegations against Hemanta Bora Koch he said Hemanta belongs to the community or where are his ancestral roots are personal concerns of the Koch-Rajbongshi organizations and there is no merit on the allegations by the ousted leader and it further doesn't command any clarification or response."

12 Feb 2014 - 7:13am | Daya Nath Singh
The Society for Socio-Economic-Development in the Region (SSEDR), a city based NGO, has raised a question mark on the initiative taken by the Assam Government with Pollution Control Board (PCB),...