Tezpur: A free career counselling programme was organized by the initiative of 'SAHYOG' -the social welfare club of Girijananda Chowdhury Institute of Management and Technology (GIMT) located at Dekargaon, Tezpur. The programme was held at Assam Valley Academy, Tezpur.

The programme was conducted by career counselor and Principal of GIMT-Tezpur, Dr Buljit Buragohain. Apart from clearing the doubts of the students while choosing the right career path, Dr Buragohain also successfully responded to all the questions.

Dr Buragohain gave detailed explanation on how with hard work and dedication, the arts and commerce stream students can mould a successful career for themselves and also informed them that he was available for career counseling over the phone every Saturday from 6p.m. to 9p.m.

Along with the students, the teachers, Principal and Director also took part in the event. The initiatives taken by the organization in spreading career related awareness among the students of the state is highly praiseworthy.

18 Oct 2015 - 9:45pm | AT News
Amid traditional religious fervor of Kati Bihu, a poor farmer in Nalbari district committed suicide on Sunday sending shock and anger across the state.Identified as Dibakar Kalita, the 48-year-old... 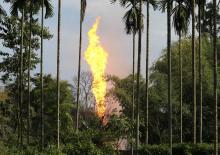