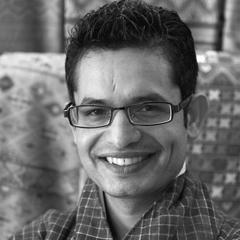 Guwahati: Thimphu based author-journalist Gopilal Acharya will interact with Guwahati scribes on Friday (21 December 2018), where the young writer is expected to speak on various socio-political and cultural issues of Bhutan. Author of Bhutanese Folk Tales, Dancing to Death, With a Stone in My Heart etc will address the member-journalists of Guwahati Press Club through video conferences from the Bhutanese capital city of Thimphu.

Born in Gelephu of the Himalayan Shangri-La in 1978 and educated in Bhutan and Sweden, Gopilal regularly contributes for CNN, South Asian Monitor, Straits Times, Telegraph, Kuensel, Bhutan Times etc. The award winning journalist will highlight bilateral relationship between India and Bhutan during the interactive session.

Interested scribes are requested to participate in the program starting at 3 pm in the press club auditorium.

16 Aug 2016 - 2:06pm | AT News
A full grown elephant from Assam died in Bangladesh on Tuesday a couple of days after it reached the neighbouring country by travelling on the river Brahmaputra. The elephant was learnt to have...

10 Apr 2014 - 7:42am | Jayanta Kumar Das
So said eminent scholar and writer of Assam Homen Borgohain at a felicitation ceremony in Borangajuli Satra at Dimakuchi on April 8. Borgohain was felicitated at Sankari Kala Kristi Bhawan,Dimakuchi...

4 Jun 2017 - 9:21am | AT News
Security forces are fanning in and around Gossaigaon sun division in Kojrajhar in search of NC Joshi a day after suspected   Santhal rebels kidnapped the senior officer of a tea garden in...