The BSU is a student's wing of ruling BPF party.  The student body said that their strike will continue until their verious demands including appointment of a new VC, filling of various posts in the university fulfilled.

10 Nov 2012 - 4:53am | editor
The Planning Commission has cleared a huge Rs 14.49 crore flood control scheme for Kamrup Rural district. The project will involve the dyke of the river Brahmaputra river from Gumi to Kalatoli. The... 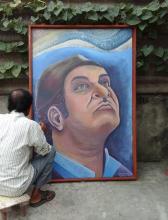 5 Nov 2016 - 3:25pm | AT News
Assam paid glowing tribute to Dr Bhupen Hazarika on the third death anniversary of the music maestro across the state on Saturday. Jalukbari broke into a sea of humanity as thousands of his fans...

2 Apr 2010 - 5:53pm | editor
Assam on Friday joins the globe as the state observes Good Friday accross the state. The Christians in large numbers are assembling at the churches to offer prayer to the Jesus. The churches in...