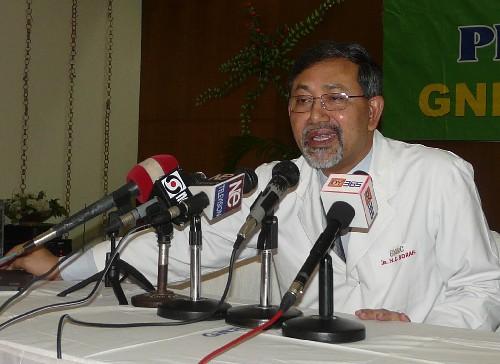 World Stroke Day is observed today across the globe. It is a day with a message regarding to stroke for every day: "Stroke is a treatable and preventable catastrophe.". The theme for this year is "Little strokes, Big troubles". "Recognize, treat and prevent vascular cognitive impairment.

Guwahati Neurological Research Centre (GNRC)- a premier neurological treatment in India organized a press meet to celebrate World Stroke Day at its auditorium hall premises in Dispur. Dr N.C.Borah, Chairman cum Managing Director, Guwahati Neurological Research Centre (GNRC) and also a eminent neurologist of the region said that "we can prevent stroke upto 80%, only by creating awareness. Dr Borah also added that, little stroke are more dangerous because it subsequently leads to a bigger stroke and the most important of all is that it is difficult to diagnose these "little strokes". Symptoms for little stroke are as common as change in personality, deterioration of thinking and decision making capabilities, and depression. It is most prevalent after 40 years, and incase if the above symptoms are observed then an immediate consultation with a neurologist or a stroke specialist, as it might be a "little stroke".
Dr Borah also spoke about the steps that can be followed to prevent stroke, they are- Control of high blood pressure, high blood sugar and lipid profile. Avoid smoking and drinking and junk food and do continue regular physical exercise.

Statistics released by Dr Borah on the burden of stroke in India gives a very serious figure. It reads as follows that one person dies, one person is disabled every minute due to stroke and 3 persons gets stroke every minute taking up the toll to 4466 people getting stroke every day. Interestingly 1.6 million people get strokes everyday. "Prevention of Stroke is the best way of Managing Stroke".

17 Sep 2017 - 10:29pm | AT News Imphal
Three militants, including one woman, belonging to the SK Thadou group of United Tribal Liberation Army (UTLA) were killed when a gun fight erupted with a group of militants suspected to be that of...

16 May 2012 - 2:32am | editor
The recent killing of four youths in Sadiya mires in a major controversy when People's Union for Democratic Rights on Tuesday accused security forces of killing the youngmen in cold blood branding...

31 Jul 2016 - 2:36pm | AT News
Assam flood scene seems to have improved marginally on Sunday as the water levels of the Brahmaputra and its tributaries have started receding in many places. But the misery levels has gone up for...