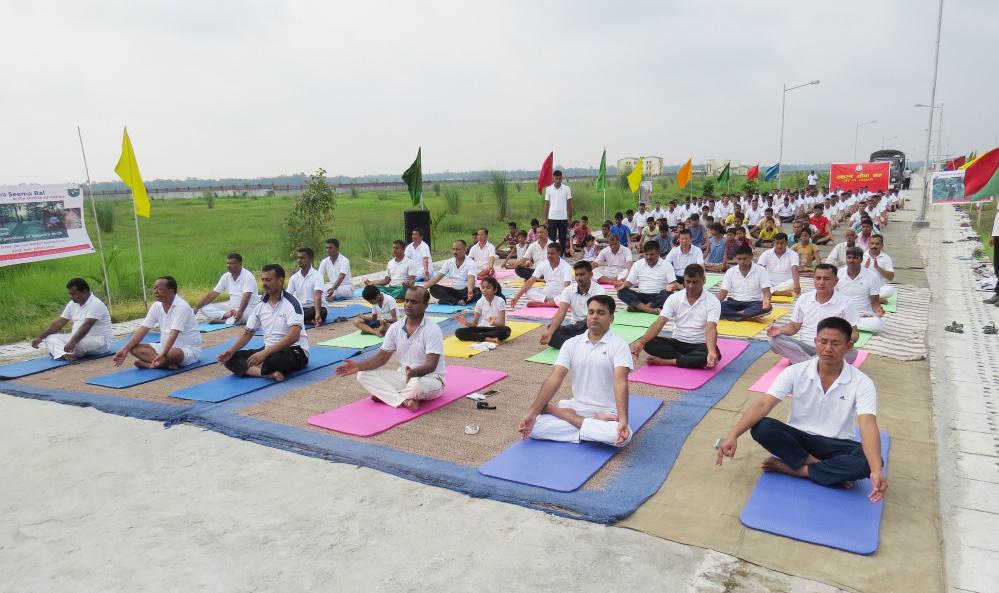 UDALGURI :  Along with the rest of the world the 4th International Yoga Day was observed by the 37th Bn Shashastra Seema Bal(SSB), Mangaldai at its Bn HQ and across all its Border outposts in Indo-Bhutan border. A total of 150 personnels including Officers, Sub-ordinate Officers, Jawans and the childrens of nearby village of Karmipara in Darrang at its new location of Bn Hqrs took active part in the event. The event witnessed various ‘asanas and pranayama’ which were practiced by the participants. Speaking on the occasion, Rohitashwa, Officer, Commandant of the battalion highlighted that Yoga is not just the ancient science which keeps us healthy, but,it is the science of radiating enlightenment; the ability to manifest whatever we want. "It is not all about making us a better man, but about making us a superman.", He said. Yoga is a powerful alchemy system that gives result as soon as we start. It should give results on day one and by one month, we should be manifesting powers. He requested the participants to cultivate the habit of practicing Yoga and wished for healthy life for all.

30 Apr 2012 - 12:43am | editor
ULFA’s anti-talk faction on Sunday comes down heavily on Arabinda Rajkhowa alleging that the chairman was trying to compromise the outfit’s original demand. The outfit asked Rajkhowa to...

28 Apr 2013 - 10:42pm | Sanjib Changkakati
Rongali Bihu was celebrated in Bahrain with pomp and gaiety on Friday, April 26 at Hotel Ramee International. The celebrations started with serving of Assamese delicacies specially prepared by the...