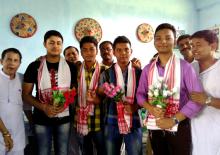 11 Apr 2015 - 9:29am | AT News
Normal life comes to a grinding halt in Karbi Anglong district from Saturday morning following the 24 hour district bandh demanding action against the rapist security personnel.Roads are wearing a...