25 Oct 2014 - 8:18pm | Hantigiri Narzary
Police on Saturday claimed to have killed a top KLO leader at an encounter in Kokrajhar on Saturday.Identified as Samar Ray alias Rambo, the Kokrajhar district commander was killed in the gunfight at... 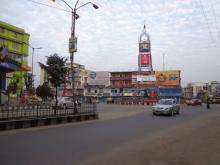 22 Aug 2007 - 4:48am | pbaruah
New Delhi: The Centre finalised a set of strategies for the North East to uplift a few sectors that have been lingering in the backstage of progress.In its 8th Sectoral Summit of the North Eastern...