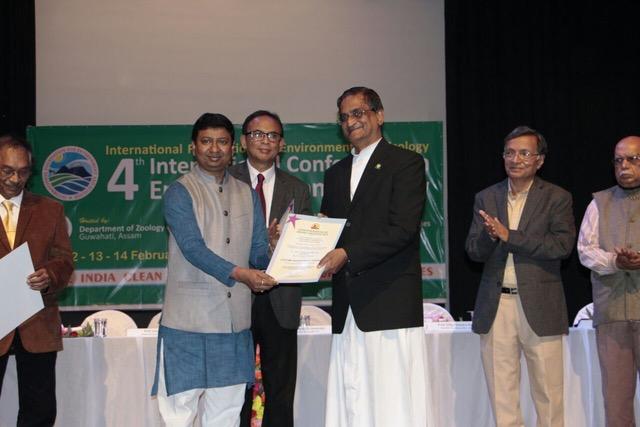 Guwahati — Vice-Chancellor of Assam Don Bosco University (ADBU) Fr. (Dr.) Stephen Mavely was conferred the Lifetime Achievement Award by Confederation of Indian Universities on the occasion of 4th International Conference on  Environment and Ecology at Gauhati University Auditorium on February 12.

The award is an international felicitation given by the confederation as per the recommendation of International Association of Educators for World Peace (affiliated to UN, ECOSOC, DPI, UNICEF).
"Don Bosco University has undergone a transformation in the recent years in terms of academics, infrastructure and overall development and has become a preferred institute not only in the North-eastern region but also for the entire nation,” says Confederation official.
Fr. Mavely has also been nominated as a member of Academic Advisory Council for Massive Open Online Courses at Consortium for Educational Communication set up by University Grants Commission.

Earleir in 2016 Fr Mavely was awarded the ‘100 Most Influential Vice-Chancellors’ in the Asia-Pacific Region by the World Education Congress, at a function held on June 23 in Mumbai.

The award, instituted for the Asia-Pacific and African countries, was based on criteria such as the importance given to strategic planning in the university, quality of infrastructure, future orientation, body of research, emphasis on sustainability, proven record of performance, personal integrity and ethical practices, Assam Tribune reported.

Education evangelists are the visionaries and change makers who have contributed and have been contributing towards the growth of Indian education system both quantitatively and qualitatively.

Fr Mavely became the first Vice Chancellor (President) of ADBU in 2008 while serving as the Principal of Don Bosco College, Guwahati.

Prior to becoming the Founder Vice Chancellor and Rector of ADBU, Fr. Mavely spent some 40 years devoted to the education of young men and women in North-East India – a mission to which he has dedicated his outstanding talents in a variety of fields: literature, media, psychology, communication, theology, management, and pastoral work.

When the concept of accreditation was still in its infancy in much of India, during his tenure as the Principal of St Anthony’s College (Shillong) he won for the college the singular distinction of being the first to be accredited in Eastern India and the first to be awarded the highest ‘Five Star’ status by the National Assessment and Accreditation Council of India (NAAC).

30 Mar 2015 - 7:34pm | Hantigiri Narzary
Campaigning from various parties and oragnisations for their candidates has been gaining momentum in Kokrajhar district along with others districts of the council to the sheduled April 8 BTC election...