Give us vote, we will give you smartphone

AGARTALA: A BJP poll promise triggers no less controversy in Tripura giving much ammunition for the ruling Left Front to attack the saffron party amid the electioneering heat and dust. If BJP is voted to power all youths in the north eastern state will receive smartphones. The poll promise comes out in the speech of party president Amit Shah who held three rallies in the state on Monday.

Later addressing a press conference Shah exuded confidence that BJP will be able to form the government in the state marking an end of the Left regime. UP Chief Minister Yogiraditya who arrived in the state to campaign for the party candidates offered puja to an ancient temple. Union finance minister Arun Jaitley released the party's poll manifesto promising all central assistance to help the state march steadily. 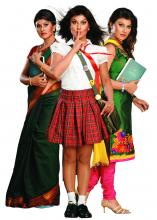 27 Sep 2013 - 10:16am | Rajdweep
In these days, it seems there is nothing else for the people interested in Assamese art & cultural to enjoy and experience except Mobile Theatre. And hence, once again spectators are showing...

4 Sep 2009 - 6:02am | Jayanta Kumar Das
Mysterious death of an elderly unmarried woman at Jhakuapara village under Kalaigaon police station in Udalguri district has created sensation in the areas. According to information received, the...