Protesters hurt in clash with police in Maibang

HAFLONG: Two persons are battling with dealth at Gauhati Medical College along with nine others when security forces sprang upon a crowd of people as they blocked the rail tracks on Thursday at Maibang near Haflong  alleging a silent move to leave Dima Hasao district in the name of the proposed greater Nagalim.

The incident took place in Maibong where police resorted to open firing to disperse the protestors who allegedly pelted stones at them when the clash took an alarming turn. Mithun Dibragede and Sunujit Sengyung who were critically have been battling to survive at the GMCH while others have been rushed to the local hospitals.

"The situation now is under control. We are closely monitoring the situation and we would firmly deal with any attempt to disrupt peace and tranquility,"said a magistrate.

Many organizations in the hills district enforced 12 hour bandh on Thursday in protest against the secret move to annex the Dimasa dominated district in the greater Nagalim. An RSS leader's statement has added fuel to the fire evoking huge protest from all sides.

Hundreds of people in Maibong blocked the rails disrupting the normal movement of the trains.

"We won't leave our strike. We will resume it. The government has suppressed our voice of protest. Wd will not allow Dima Hasao to be annexed into greater Nagalim," said Rupam Hojai, a protester.

10 Jan 2015 - 6:53am | AT News
Amid a pall gloom, the mortal remains of Amarjyoti Kashyap has reached Jorhat two days after the Dibrugarh university professor met watery grave on the Arabian sea in Gujarat.Hundreds of people... 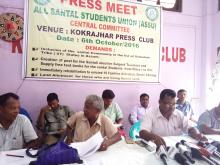