5 Mar 2008 - 3:36pm | editor
Atleast four people have been injured when suspected ULFA militants exploded a powerful bomb at around 7-30 in the evening in Lakhimpur town. According to information, the blast took place in front... 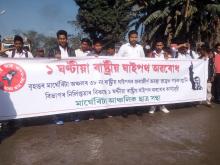 Focus on pathetic plight of NH 38

4 Jan 2018 - 8:52pm | AT News
MARGHERITA: More than 200 AASU leaders and activists blocked the National Highway No 38 in Margherita on Thursday for one hour demanding immediate steps to repair the vital road which has been lying...