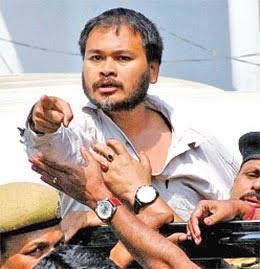 Talking to reporters immediately after coming out of the Goalpara Central Jail on Wednesday morning he said he was put behind the bars on flimsy ground.

"The charges brought against me are fabricated and baseless. This has been proved beyond doubt," said Gogoi.

He said,"we KMSS will help the authority complete an error free NRC and we won't allow anybody to settle immigrants who came here after the cut off date "

In his scathing attack on Chief minister, Gogoi said Sonowal is no longer a national hero. The real hero these days is none other than Justice Ranjan Gogoi.

Sonowal is a puppet who along with Himanta Biswa Sarma have been agents working on behalf of New Delhi.

Gogoi who was sent to judicial remand in Mid September came out of the Goalpara Jail in the morning to be greeted by his fans and followers who thronged in front of thr jail premises from last night.

A local court on Tuesday granted him bail to facilitate his release.

4 Apr 2013 - 9:21pm | Juthika Das
Over 50 students of a school in Barpeta fell ill after being administered vaccine for Japanese encephalitis on Thursday.The students of Baghbar ME School were taken ill after they were administered...

8 May 2014 - 9:58am | AT News
Men-elephant conflict refuses to die down in Assam. After a brief lull, two women lost their lives in two different incidents of attack on men on Thursday.The first incident took place in Guwahati...