The sensation murder of Sweta Agarwalla is no longer a mystery now. The person that took her life was none other than Govind Singhal who forcibly took the KC Das Commerce College girl to his house as she was on her way back to her house in the afternoon.

During police interrogation Govind, a colleague intern of a firm confessed to have hit her on the wall before she died. Then he along with his mother and sister poured kerosene on her body to destroy evidence and planned to depart the city.

Govind was angry with her when she has been repeatedly refusing to be with him.

On the other hand, many organizations and individuals have mounted pressure on the authority to ensure capital punishment of Govind, his mother and sister for committing the double crime. 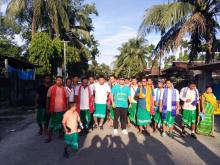