TINSUKIA:More than 1000 people five different organizations staged dharna in Tinsukia on Monday alleging a conspiracy to compromise Assam's territorial integrity in the name of the greater Nagalim.

The leaders of the five student and youth organizations who staged demo in front of the Deputy Commissioner's office dared the Centre to make public the peace frame work signed between the NDA government and NSCN-IM three years back.

Later, they sent s memorandum to Prime Minister through the Deputy Commissioner raising the demand. They further threatened to launch a massive agitation if the Centre compromises Assam's territorial integrity. 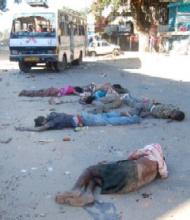 Campaigns over; stage set for bypolls

11 Sep 2014 - 5:18pm | AT News
The campaign is over as soon as the clock struck at 5 in the afternoon. Jamunamukh, Silchar and Lakhipur assembly constituencies are all set to go to the by polls on Saturday. All poll posters and...