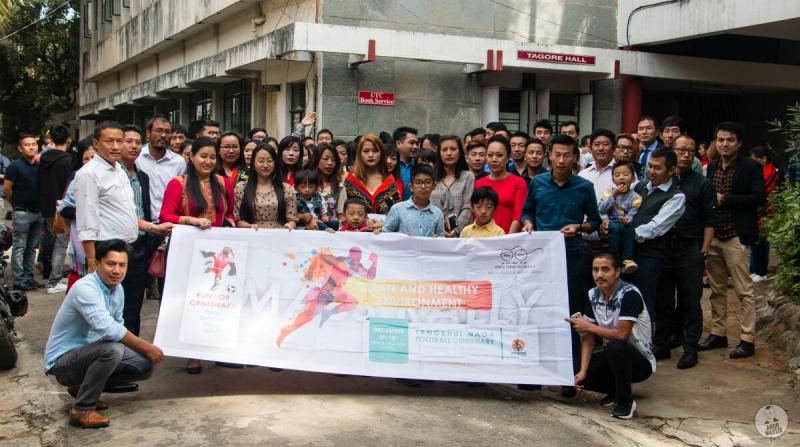 Showing solidarity and support for the upcoming Tangkhul Naga Football Centenary (TNFC) in Manipur’s Ukhrul District, Tangkhul Baptist Church, Bangalore (TBCB) and Tangkhul Katamnao Long Bengaluru organised a "Run for Peace" and "Run for Centenary" respectively in Bengaluru on Thursday.
Recalling the 66th labour corps from Manipur, Pastor Khayaipam Khamrang of TBCB states that such development should be encouraged. Pastor Khamrang concluded with warm wishes towards the success of the football centenary program.
TNFC, an initiative of Araang League, is a commemoration of the Tangkhul players from the 22nd Manipur Labor Corps who played for the 66th unit team in Blargies, France during WWI, 1917. In lieu of the centenary, a tournament is set to be held from 5th to 18th December.
On 15th November, Tangkhul students in Guwahati also organized the "Run for Centenary" rally at Guwahati University Campus. The run was participated by around 70 people, including the Tangkhul well wishers and elders from Guwahati. The group also took a pledge to support the TNFC. The pledge reads, "We the Tangkhul Community, along with our well wishers here in Guwahati hereby come together this day the 15th of November, 2017 do pledge our solidarity towards the Tangkhul Naga Football Centenary, 2017, in commemoration of the 66th labour corps France 1917, to be held in December, in Ukhrul and do hereby undertake this mass rally in solidarity with the Tangkhul Naga Football Centenary. May our lord and savior Jesus Christ bless us all."
In 1917 , an 11 team member consisting of Rev. William Pettigrew’s student played against the French opponent. They were first introduced to football in 1907. The name of the 11 members included Chara, Haitong, Kanrei, Khorkham, Lungthuk, Ngashangshi, Porom Singh, Reichumhao, Tariya, Wokkha and Wungzek.
The tournament will see 16 teams competing for the top prize of five lakhs rupees (Rs.5, 00,000) in cash and the trophy and other individual awards. Through this initiative, Araang league wanted to highlight the importance of football, which ‘empowers the youth and dissuade them from defiant behaviour’. The TNFC has roped in several stars, singers and celebrities including designer Asa Kazingmei and the reigning Miss Manipur Phapha Gachui, 2016 as ambassadors for the forthcoming tournament.

17 Dec 2014 - 8:33pm | Subhamoy Bhattacharjee
In a successful rescue and rehabilitation operation by the International Fund for Animal Welfare (IFAW)-Wildlife Trust of India (WTI)  run Mobile Veterinary Service (MVS) team, a one and half-...

28 Sep 2015 - 2:38pm | AT News
At least 40 persons have been missing when the machine boat carrying them met with a mishap in the river Kolohi in the outskirt of Guwahati on Monday.The incident took place when the overcrowded boat...