The 5th general Panchayat polls in six districts of the valley were held peacefully amid stringent security measures adopted by the Manipur government on Saturday with a high voter turnout.

Official sources expected the voter turnout could stand at 90 per cent. The Panchayat polls witnessed an unprecedented enthusiasm among voters with record turnout.

People stood in queues from early morning to cast their vote. The polling which began at 8 am ended at 4 pm.

The polling was by and large peaceful, barring a few stray incidents. Most of the polling officials have returned to respective offices of Deputy Commissioners.

If necessary, repolling will be held on October 9 and that all activities related to the polls will be closed by October 16, officials said.

A total of 391 Pradhan and Gram Panchayat Members have already been declared elected uncontested.

The State Election Commission provided three different colour of ballot papers to voters in the polls. 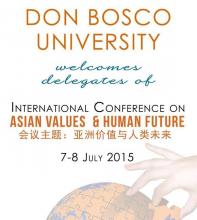 6 Jul 2015 - 9:51am | CM Paul
A city university is collaborating with a Chinese counterpart to organize a three-day international conference on Asian values and human future.Some 80 scholars and delegates from 11 countries are...