Journalists’ Forum Assam (JFA) strongly condemns the brutal murder of a young scribe in Tripura on Wednesday (20 September 2017) and urges Manik Sarkar led Left government at Agartala to book the culprits under the law.

The initial reports narrate that Shantanu Bhowmik, 29, who was associated with a local news channel faced attacks when he was covering a clash between the Indigenous People's Front of Tripura (IPFT) and Communist Party of India (Marxist)'s tribal wing Tripura Rajaer Upajati Ganamukti Parishad (TRUGP) at Mandai, few kilometer away from Agartala on Wednesday afternoon.

Seriously injured Shantanu was taken to a government hospital, but the attending doctors declared him brought dead. He becomes the seventh Indian victim-journalist this year after the murder of Bengaluru based editor-journalist Gauri Lankesh, 55, on 5 September last.

“Shantanu’s murder reminds the working journalists of northeast India about the insecurity they have to face every day on duty hours. 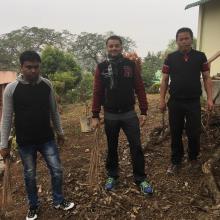 24 Jan 2016 - 7:46pm | AT News
A group of Guwahatians have joined a nationwide initiative named Shramdaan on 24 January 2016 at the premises of Kasturba Gandhi national memorial trust in the city. The group cleaned up the frontal...

7 May 2008 - 11:54pm | Daya Nath Singh
Frequently the media reports go through the failures of Assam Police, on which the common people have started losing confidence. From time to time people complain about non-registering of their...
Follow @Assam Times