Students urged to march ahead 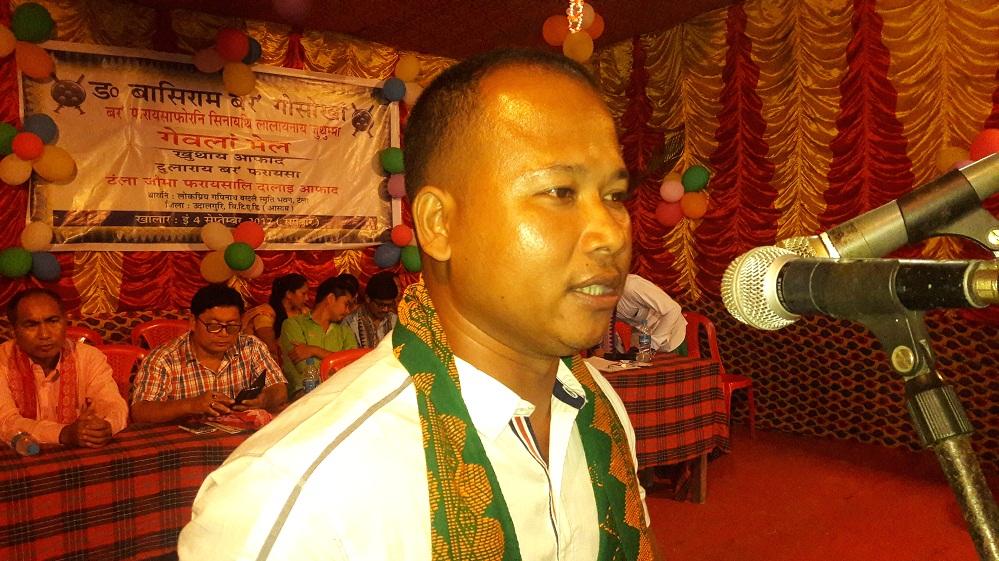 The Tangla college unit ABSU (All Bodo Students' Union) organised Dr. Bashiram Boro memorial fresh men social ceremony of Bodo students at Bordoloi Bhawan of Tangla on Monday.
Prof Krishna Basumatary in  his key-note speech Basumatary urged students to dream of highest goals and march ahead with dedication.He observed that students should know their strong points develop skills and hone them to be sucessful.

Lawrence Islary General Secretary ABSU graced the event as chief guest. In his lecture he recalled the history of the growth of Bodo literature. He reiterated the role played by ABSU in upliftment of education scenario among the Bodo community. He exhorted students to follow the pathway of sucessfull Bodo people like Harishankhar Brahma and Ranjit Shekhar Moshahary .He called for economic,social and political development of the Bodos .He reiteirated ABSU's initiatives like holding career counselling,motivational programme and civil service tutorial programmes for the upliftment of students of BTC region.

Attending the programme as appointed speaker Tenzing Bodosa an organic tea planter whose tea garden holds the certification as the world’s first elephant-friendly farms by the World Wildlife Fund (WWF).

Bodosa spoke on his journey from being a school drop-out to establishing an organic tea processing unit. He spoke on the harmful effects of chemical pesticides used in farming lands. He exhorted the stidents not to be swayed away by trend and come forward to pursue farming as a career.

25 Aug 2017 - 10:57am | editor
A local magistrate in Nagaon on Friday remanded Mithu Roy to two days police custody after the trader was produced before it in connection with the recent incident where he and his...

21 May 2008 - 1:37am | editor
CPI(ML) leader and former MP Dr Jayanta Rongpi has held the Assam government responsible for the burning situation in the North Cachar hills district and said the Gogoi Government has failed to...