Bowing down to mounting pressure the Centre has handed over the probe into the killing of Lafikul Islam Ahmed to CBI. Now a CBI probe will unearth the story behind it and identify the killer of the minority student leader on August 1 in Kokrajhar.

There has been incessant demand for a CBI probe into thr sensational case forcing the state government to write to the premier investigation agency. The Centre confirmed it on Monday. 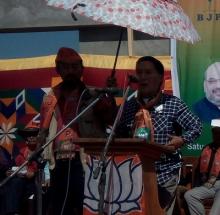 28 Nov 2016 - 4:49pm | AT News
The Assam government employees have every reasons to celebrate. The good news came from Dr HImanta BIswa Sarma who said that the government will implement the pay panel recommendation from April in...