The freshmen social of Tangla College for the year 2017 was held at the college premises on Thursday where the new students were introduced to the old ones. The ceremony was followed by an open session and cultural programme. The students introduction ceremony was chaired by Swapen Acharjee.

The open session in the evening which began with a chorus by the students was chaired by Jayanta Chakravorty HOD of English. In his welcome speech Dr. Prasen Daimari Principal of the college said that, "Only acquiring knowledge and education is not enough.Students should be decent having suitable conformity by physical ,mental and moral.” 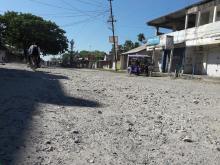