The Government of Assam Sunday declared Journalist Pension to twenty senior journalists of the state for the first time under the Assam Pension Scheme for Journalists.

It is mentionable that the pensioners will receive a sum of Rupees 8000/- per month during their lifetime. The Pension Scheme will come into force immediately with effect from April 1, 2017. Under the scheme benefit of the pension will be extended to the widow or widower or minor children of the journalist at the rate of 50% of the pension amount after his or her demise. In case of physically challenged or mentally disabled children they will continue to get pension at the rate of 50% till the time they do not get employment.

The Assam Pension Scheme for Journalists covers retired journalists who has attained the age of sixty and are domiciles of the state of Assam and has served as a journalist for a minimum of 20 years preceding his or her date of retirement.

10 May 2015 - 4:03pm | Syed Miraz Ahmed
The Assam Flying Club initiated by the Late Radha Govinda Baruah became completely dysfunctional since 2010. The Government of Assam and all concerned departments of the Central Government completed... 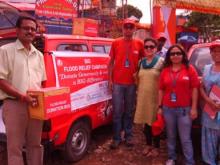 26 Sep 2008 - 1:27am | Nanda Kirati Dewan
Big 92.7 FM has organized a flood relief campaign at Guwahati in association with Bosco Reach Out and Rotary Club of Guwahati to support the relief measures being undertaken for the flood victims of...