Surging waters of the Brahmaputra threaten to submerge Nagaon town striking panic button among the citizens of the central Assam district on Sunday.

The overflowing Brahmaputra waters breached a portion of a vital embankment in Jakhalabandha leaving huge volume of waters to the river Kolong which flows across the town.

The district administration has sounded alert among the people in view if the situation. 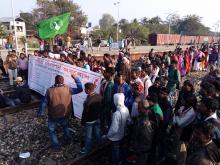 19 Dec 2017 - 5:11pm | AT News
KOKRAJHAR: Thousands of passengers bore the brunt of the rail blockade by ANCC in Kokrajhar as they demanded ST status, land pattas and talks with the rebel outfits on Wednesday morning. 'We are...

30 Oct 2014 - 6:40am | AT News
The All Assam Students’ Union (AASU) asked the government to firmly deal with the Islamic fundamentalists, including the Al-Qaeda, and the illegal Bangla migrants who have been sponsoring these...