Conference on Adivasis held in Delhi 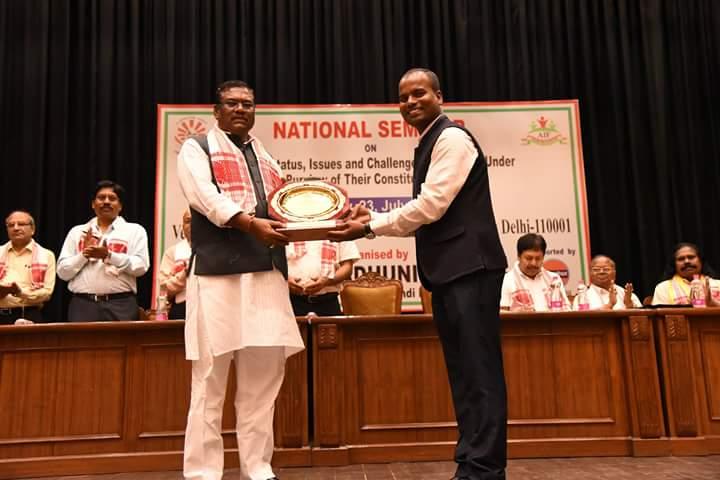 The development of the Adivasi community will only progress the nation and bring prosperity among the people. This was observed by Faggan Singh Kulaste, Minister of State for Health and Family Welfare at a national seminar on 'Identity, Status, Issues and Challenges of Adivasi under the purview of their constitutional rights' in New Delhi on July 23. The seminar was organized by Aadhunik India Foundation and Aadhunik India -a National Hindi newspaper . Attending the programme as chief guest Kulaste said that," The BJP government at the centre has adopted various welfare policies for the upliftment of the Adivasi community and more such policies would be adopted in days to come.

Lauding the efforts of Aadhunik India for organizing such an event and referring to the history of the  Adivasi people Kulaste observed that Adivasis are the indigenous inhabitants of the nation.Since ancient times they have inhabited in the water, forests and land of the nation.

Kulaste further added that "The Adivasis were the first to revolt against the British empire in India.He visioned the ideologies of tribal freedom fighter Birsa Munda aling with paying deep tribute to Sidhu Murmu and Kanhu Murmu the leaders of the Santhal rebellion (1855–1856), the native rebellion in present-day Jharkhand in eastern India against both the British colonial authority and the corrupt upper caste zamindari system.

Referring to the long pending issue of tribal status to Adivasis residing in Assam Kulaste said that the BJP government both in centre and Assam are materializing the issue .

Attending the programme as appointed speaker Nand Kumar Sai  chairman of the National Commission for Scheduled Tribes (NCST) said after independence in the name of developmemt, civilization and the Adivasis have been displaced from their forest lands which he linked to be the prime cause of the Naxalite–Maoist insurgency. He exhorted the present government to deliver the constitutional rights to the Adivasi people living across the nation. He also observed that different status to Adivasis in states of the country has hampered the development and advancenent of the community. He also exhorted the Chief Ministers of states to apprise the Central government on the ST issue through State Commissions .

Speaking on the ocassion Naba Kr. Sarania Kokrajhar Loksabha MP referring to the opposing of ST status issue to Adivasis by certain ethnic communities of state exhorted to rather support the issue abd help deliver constitutional rights to the community.

Earlier the welcome speech was delivered by Chairman of Aadhunik India Foundation Dinesh Kumar Chauhan he spoke ob the discrimination of Adivasi people in the country. He also exhorted the government to pay heed to the rights of the Adivasi people.

12 Feb 2015 - 7:17pm | AT News
The landslide victory for AAP in Delhi is set to be the big booster for its workers in Assam. Thousands of people are in touch with the Assam AAP leadership for joining the party.“Yes, it has boost...