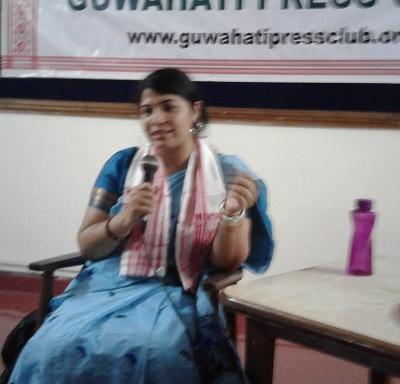 The news was astonishing as an Assamese lady was selected for Whitley Award, also known as Green Oscar, and invited to London to receive the coveted award. Suddenly Purnima Devi Barman emerged as an icon across Assam. But the residents of many parts in Kamrup were familiar with the and her mission to conserve Greater Adjutant Stork (popularly known as Hargila or Dhadang).

Purnima, 37, has been working in the villages since 2009 where once the people found the bird as dirty, but today they feel proud of it and virtually own the responsibility to preserve the tall bird’s habitats adjacent to their localities. The rural ladies came forward to join hands with Purnima to adopt the birds as their children. Thus the first hurdle for Purnima to conserve Greater Adjutant Stork (Leptoptilos dubius) in Dadara, Pacharia and Shingimari areas was over. She cleverly motivated the community not to cut trees, the natural habitats for the birds, and also used their stories in community sings and handicrafts.

Recently attending the Meet the Press program of Guwahati Press Club, Purnima narrated her tales to the scribes. Receiving felicitations from the press club members, she urged them to be a part of the movement and help expanding it to other parts of the region.

According to her, Greater Adjutant Stork has a world population of not more than 1200, where nearly 800 individuals are available in Assam. The birds are also found in Bihar of central India and in some parts of Cambodia, where as those were widely found in various parts of South and South East Asia few decades back.

Soon after her post graduation in Zoology, with special focus on Ecology and Wildlife Biology, from Gauhati University in 2002, Purnima started working for an Assam based environment NGO named Aranyak. She found that the Wildlife Protection Act, 1972 (India) has the provision to safeguard the large bird, but it has no jurisdiction towards its habitats.

Purnima, who is married to a senior wildlife conservationist Rathin Barman, believes that she has miles to go before completing the study over the birds and their habitats. Her immediate work will be a survey of the birds in natural habitats and extend help framing policies to conserve the endangered species.

12 Oct 2016 - 11:14am | AT Kokrajhar Bureau
Preparation has so far completed today to hold 19th Daoharu Mungkhlong trophy at Dotma play ground beginning from Wednesday in Kokrajhar district. The trophy has been organized every year in memory...

1 Aug 2017 - 1:10pm | AT News
Prime minister Narendra Modi has assured Assam all possible to help the state mitigate the misery in the tine of flood as he reviewed the situation in Guwahati on Tuesday. Flanked by governor...

21 Mar 2021 - 2:21pm | Madhu Chandra
Originally known as the Sven Sisters of North East India and Sikkim was added to its eighth state recently and soon after India got independent, the first home minister, Sardar Vallabhbhai Patel was...