A special NIA court on Monday convicted altogether 15 people for siphoning off an astrological amount of money meant for development in Dima Hasao district a couple of years back much to the benefit of a local rebel groups.

The court is expected the announce the quantum of punishment on Tuesday as the arguments concluded on Monday.

The court has further convicted Hawala operator Malsamwkimi and Vanlalchana who us an arms smuggler.

During investigation, more  than one crore in cash along with a huge cache of arms and ammunitions were seized in two different checkings. 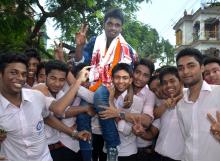 2 Jun 2016 - 3:53pm | Dibya J Borthakur
Angkur Jyoti Bora, a resident of Rahachaki village, Raha and a student of Ramanujan Junior College, Nagaon  who topped in the State in Science stream, wants to become an engineer. He scored...

We need to contribute together for portraying Northeast India

28 Aug 2007 - 5:04am | moushumibhattacharya
The North East: Unknown, remote, exotic and barbaric. Land of the dog-eating, half naked, gun-toting tribal. And the best of all is that, it is a region to be regarded as a museum piece, a subject...

5 Apr 2013 - 1:25pm | Abdul Gani
This time the 5th edition of Prag Cine Awards will be graced by a host of Bollywood celebrities including the directors Mahesh Bhatt, Kalpana Lajmi, Puja Bhatt and actors Adil Hussain, Munmun...