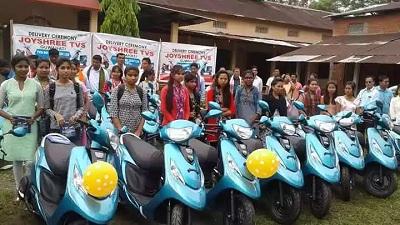 In a goodwill initiative of the BTC authority and upholding one of its pre-poll promise. Meritious  girl students of underpriviliged BPL class  who cleared +2 Exams last year were awarded with a gearless  scooter each in a ceremonial function at Udalguri HS School on Saturday. This is the first of its kind programme which got underway from Udalguri. A total of 26 gearless scooters were given away to BPL girl students of the district. The programme was graced by Kampa Borgoyary, Hon'ble Deputy Chief of BTC, RS Borgoyary, director of Education, BTC, Rihon Daimari, hon'ble Cabinet minister of Assam, Tridip Daimary speaker of BTC, Jagadish Sarkar among many others.

14 Apr 2012 - 2:25pm | Daya Nath Singh
Established in 1901 Digboi oil refinery is not only India’s, but Asia’s first oil refinery, which is now losing its glory due to present marketing policy and mismanagement. According...