Amid an aroused controversy over the cut off year to detect and deport the immigrants from Assam, cabinet minister Himanta Biswa Sarma said the lives of 900 people could have been spared had the Assam agitators signed the Accord in 1979.

Talking to reporters in Guwahati Sarma said,”after 900 people were martyred the Accord should have like would be examined-like words.

“With 1971 as base year why the Accord was not signed in 1979. During the entire period of six years they refused to relent which was why, 900 people lost their lives.”

Sarma spoke out a day after PK Mahanta, the then AASU leader admitted that they were running the agitation for 1952 as base year and Centre mounted pressure on them to accept 1971 as base year which they did.

19 Jun 2013 - 8:24am | AT News
Braving a rising mercury voters are lined up across 862 booths in the ongoing civic polls in Guwahati city on Wednesday. Assamtimes team came to see the huge queue of voters even before 7 in the... 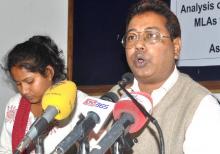