Couple half buried in Lakhimpur

A group of villagers in Lakhimpur district inflicted inhuman torture upon a couple charging them with practising black magic hardly a week after a couple were killed in Kokrajhar sending shockwaves across the state.

The incident took place at Moinahuri in Dhakuakhana where a group of villagers dragged Brojen Doley and his wife to a sandpit to be beaten up before allowing them to be remained half buried alleging witch craft.

Acting on complaints police came and rescued the couple and registered a case. But by then the villagers fled from the spot.

“The incident took place in the midnight where some youths picked up the couple and brought near a jungle where they were severely assaulted for witch craft. They denied the charges. But the perpetrators refused yo listen to them. Then we called up the Dhakuakhana police who later rescued the couple,” said a local resident of Moinaguri village where it took

14 Jun 2015 - 12:03pm | AT News
There seems to be no let up in the overall flood scene with rains refusing to halt on Sunday. More and more areas have come under the surging waters during the last 24 hours. The Brahmaputra and its...

9 Jan 2014 - 10:56pm | Ajoy Warisa
Commuters in the town had hard time as Auto Bandh enters second day in Haflong on Thursday. Auto Drivers have been protesting against what they say "police atrocities and unnecessary fines levied on... 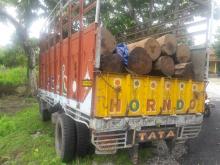 18 Aug 2016 - 6:49pm | AT Kokrajhar Bureau
Police and forest department officials, once able to seize a laden truck with Sal and non Sal logs,which were carrying by smugglers along at Karigaon along 31 C National Highway early this morning in...