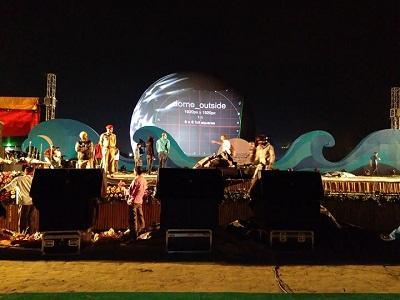 An improved weather has given Guwahati some sort of respite as the premier northern eastern city is opening the country’s largest river festival on Friday.

A bedecked city beckons thousands of people to the Brahmaputra river banks to witness the opening ceremony of the five days event to invoke the Brahmaputra, the silent witness of every single moments of joy and sorrow of Assam and its people.

The riverbed in Guwahati wears a different look hours before the arrival of President Pranab Mukherjee to open the Namami festival being organized in 21 districts simultaneously. Small and big boats are sailing on the rivers ferrying the people from one station to another.

“It's exciting like never before. It's beautiful indeed. The mighty river is dressing afresh. Keep flowing, silently, steadily,” said Pragya Das, a Cotton College student who is pursuing her post graduate course.

Shantanu Das, a budding poet is equally impressed at the beauty of the Brahmaputra river front. “Herein, in fact, lies immense potentials to promote tourism in Assam. With clear intention and good will it could be beautified like Mumbai. I hope, the government would come forward to strike the advantage,” said Das.

The incessant rains on Thursday to some extent dampened the festivity. The weather forecast added to the worry. But the clear morning poured huge hope on the Guwahati denizens who are waiting to make the event a success.

President Mukherjee is opening the event at a glittering function at 3 in the afternoon in presence of union ministers and other dignitaries. Bhutan prime minister gas already arrived in the city to participate in the festival.

15 Feb 2016 - 11:11am | Suraj Gogoi
A university as an institution represents a responsible entity which should fight against any injustice in society. It cannot be a mute spectator to the unjust and violent events that unfold in... 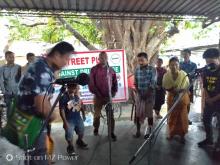 27 Oct 2019 - 1:11pm | AT Kokrajhar Bureau
KOKRAJHAR: A street play on drugs abusive was performed highlighting effects of at Balajan Tinali Bazar, Kokrajhar on Friday to create awareness on drugs and alcohol use amongst the peoples. The...