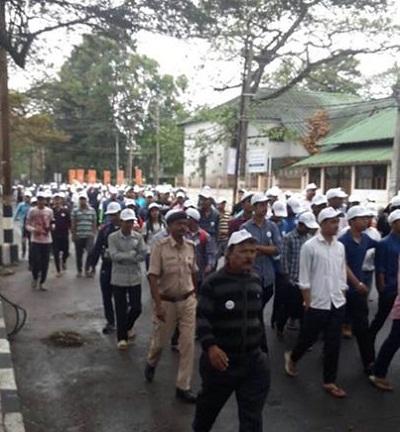 An incessant rain might dampen the joy of the Namami Brahmaputra opening ceremony in Guwahati slated for Friday.

The weather men in the premier north eastern city have predicted more rainfall on Friday and there is hardly any sign of let up till next week.

Drizzle drops in the morning disrupted the marathon race on Thursday in Guwahati organized a day before the opening ceremony if the five day long festival to invoke the mighty river god.

President Pranab Mukherjee us coming on Friday afternoon to formally open the country's biggest ever river festival in presence of more than 300 VVIPs and VIPs.

A cultural contingent from Majuli is arriving on Friday morning covering nine districts on the Brahmaputra to attend the festival which will conclude on April 4.

9 Sep 2014 - 9:29am | AT News
Now its turn for the Narendra Modi government to push the land boundary pact with Bangladesh much to the major embarrassment for the state BJP leadership. According to sources available with Assam...

29 May 2009 - 4:50am | editor
The HSLC and High madhara results were declared today. Results can be checked online at this link: http://assamresults.nic.in/hslc08seba.asp