The member-journalists of GPC along with their dependants also got their weight, blood pressure & sugar checked by nurses namely Momi Begum and Asha Devi. Most of the participants were also provided necessary medicines.

The next camp on 4 March 2017 under the GPC’s series of ‘Evening with a Doctor’ programs will be conducted by the Panbazar based Institute of Dental Science & Research Center, where Dr Deep Sharma and Dr Nirmala K Roy will go for oral & dental health diagnosis & treatment planning. The camp will begin at press club premises by 3 pm and continue till 6 pm.

21 Jan 2014 - 9:39pm | AT News
Security forces are spreading tentacles against ULFA(I), NDFB-S and KLO apprehending subversive activities in the run up to the Republic Day celebrations.During his visit to Chirang district on... 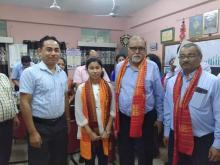 25 May 2019 - 5:40pm | AT Kokrajhar Bureau
Kokrajhar: Namrata Nath of Bongaigaon Refinery HS School, Dhaligaon,Chirang has brought enthusiastic laurel in Dhaligaon as well BTAD region, spotted in the 6th position in Science Stream in the HS...