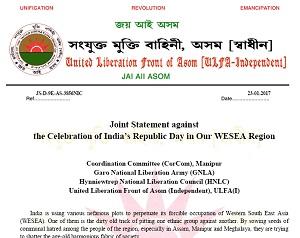 With just two days to go for the Republic Day celebrations, fraternal outfits (CorCom, GNLA, HNLC, ULFA (I)) Monday issued a joint statement asserting that India is using various nefarious plots to perpetuate forcible occupation of Western South East Asia (WESEA), one of which is the dirty old trick of pitting one ethnic group against another.

“By sowing seeds of communal hatred among the people of the region, especially in Assam, Manipur and Meghalaya, they are trying to shatter the age-old harmonious fabric of society,” stated the communiqué.

The outfits are of the opinion that underhanded dealings of Delhi with some armed and unarmed groups to sabotage the liberation struggle are increasing day by day. By encouraging the parochial sectarian agenda of some communities, the Government of Indian is trying to upset the peaceful co-existence of numerous ethnic groups of the region. The venom of communal hatred is so widespread in Manipur that there is the danger of igniting communal clashes any day if we are caught in the trap of the enemy.

Another oft-repeated dirty trick they feel is the use of surrendered militants in many shady activities in order to derail the liberation movement. India is yet to learn the lesson that it is a useless venture, which would only result in the end of the miserable lives of those cowards who betrayed their people.
Besides, the Indian leadership’s sheer lack of humanity and arrogance is amply exemplified by the recent
controversial and infamous demonetization of some denominations of Indian currency.

“One cannot but appalled by the obsession of personal aggrandizement and egotism displayed by Indian leaders. Lack of understanding and sympathy for the underprivileged masses of mainland India who suffered immensely due to this fiasco is so great that we are even more convinced of the level of stupidity and cruelty of Indian governance.

The release questioned as to how would the people of WESEA, which was never a part of India, expect anything good from this country, which has no qualms about unleashing brutality on its own citizens?

“It will be a grave mistake on the part of the Indian military commanders if they consider our concern for human casualty in the ensuing freedom struggle as a sign of weakness. Regaining our lost sovereignty by defeating the evil designs of India is the only way to a dignified existence of the people of WESEA. As India’s celebration of Republic Day in WESEA is a stark reminder of colonization of the region by India, we ought to dissociate ourselves from it,” the release sharply remarked.

The restriction however, is not applicable to emergency services which should function normally during the mentioned hours.

15 Jul 2012 - 9:52pm | editor
Two more molesters have been arrested during the last 12 hours in connection with the Guwahati incident a day after a police officer with Dispur has been suspended alleging dereliction of duty....

5 Apr 2017 - 8:19pm | Shajid Khan
An incident of theft was reported in the Office of Harisinga Revenue Circle Office at Bazaarkhola of Tangla. Thieves broke open the gate and looted CCTV camera equipmemts on Monday night. The...