When AJYCP tries to maintain a movement 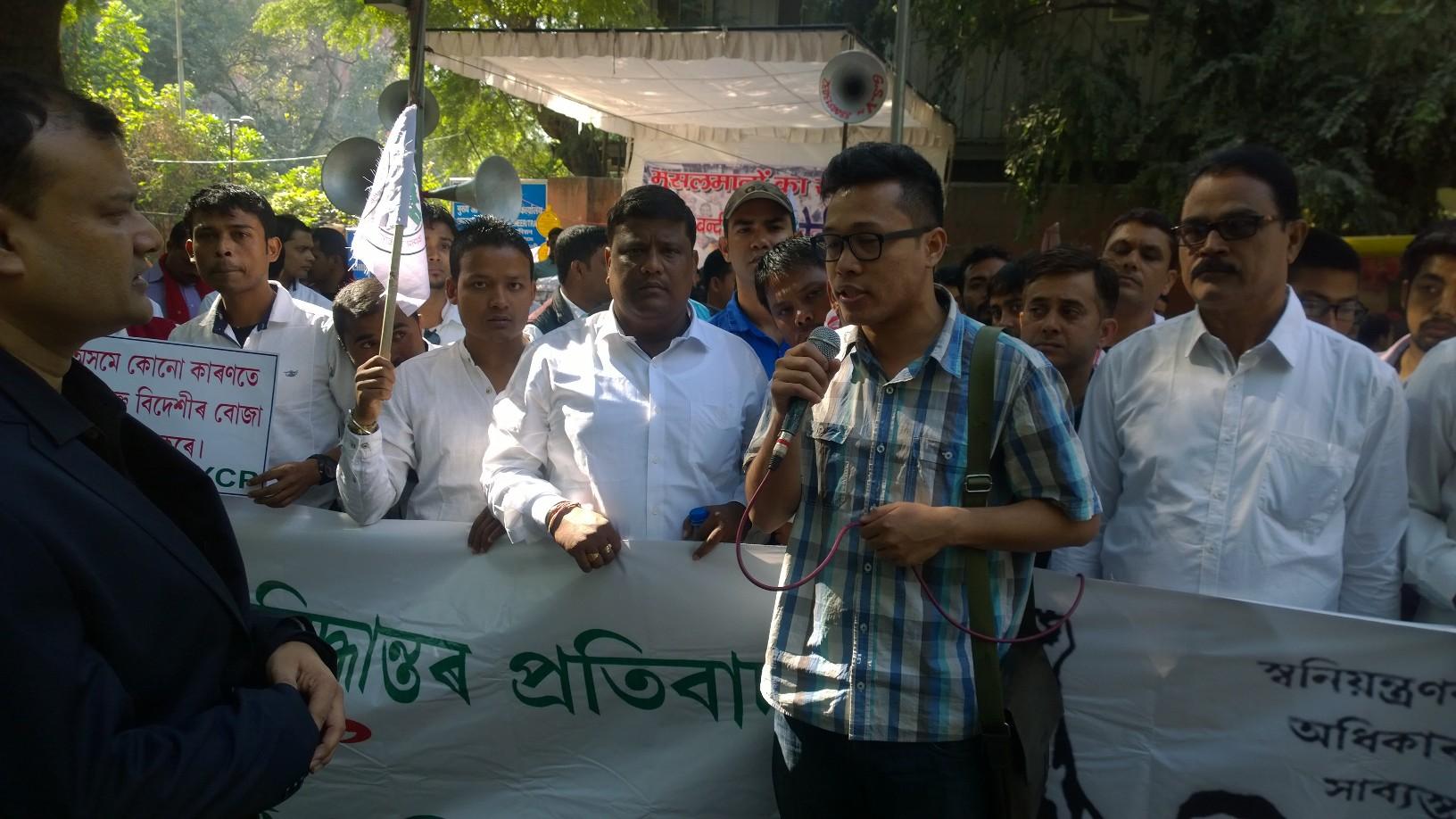 Assam’s influential organization Asom Jatiyatabadi Yuva Chatra Parishad along with few other influential groups from northeast India staged a demonstration on Monday in the national capital protesting against the Centre’s move to amend the Citizenship Act, 1955.

It also added that the BJP-led government has no right to downplay the sentiments of the millions of northeastern people and the AJYCP won’t remain calm unless the politically motivated move is abandoned. The New Delhi-based Naga Students Association, Manipur Students Union, Tripura Students Association, Khasi Students Union, along with many JNU and Delhi University students participated in the demonstration. SFI leader Prashant Kumar and Tripura student leader Dharanjit Debbarma also joined the protest with a pledge to carry forward the movement.

Meanwhile, in the backdrop of an uproarious atmosphere in Assam against the Union government’s move to grant citizenship to religious minorities from Bangladesh and Pakistan, a nationalist people’s forum raises voice for a concrete refugee policy for the country to deal with such situations in future.

Patriotic People’s Front Assam (PPFA), in a recent memorandum sent to Assam Governor Banwarilal Purohit, argued that India should have the refugee policy ‘to deal with the issue of immigrants logically and legally’ forever.

The memorandum also expressed concerns that few ‘recent misleading and manipulative statements by some individuals and organizations on the Citizenship (Amendment) Bill 2016 issue’ were ‘trying to communalise the issue instead of helping to find an amicable solution’.

“We are from this land of glorious civilisation & culture and we feel that our spirit should be that of accommodation of Hindu’s, Buddhists, Christians, Sikhs and other religious minorities who have had to face extreme suppression in erstwhile East Pakistan (now Bangladesh) and also West Pakistan and have been the true victims of partition of India,” pointed out the memorandum, backed by DN Chakrabarty, Rupam Barua, Bidhayak Das, Utpal Dutta, Bobita Sarma, Braja Jyoti Sharma, Bibekananda Choudhury, Bhagawat Pritam, Ujjal Saikia, Jagadindra Ray Choudhury, Girindra Kumar Karjee, Anup Sarma etc.

Appreciating the Centre for taking steps lately to provide shelter to the victims of partition across India, the PPFA clarified that the Hindu minorities in Bangladesh include not only Bengali, but also Rajbongshi, Hajong, Adivasi, Jayantiya and Bishnupriya communities. Similarly, the Buddhists include Chakma and some Assamese people who fled to the Chittagong hill areas of Bangladesh during the Burmese invasion. The Christians include Bengali, Garo, Khasi and Adivasi people. All these people became the victims of Pakistan plan & partition and had to live in a ‘foreign land’, for the creation of which they were not responsible, commented the forum.

The memorandum clarified that PPFA has no intention of communalising the issue but it wants to ‘provide a clear understanding of how history unfolded lest some vested interests and parochial mindsets for their own narrow political gains and cheap mileage would continue to resort to disturb the peace and tranquil atmosphere of Assam’.

“There is a need for a solution to this vexed issue and we would fully agree if those who have been truly victimised owing to the partition and religious persecution are given a place not just in Assam but in all other States of India, a country where the underlying tenets of democracy are tolerance, secularism and freedom of religion, faith, practice and freedom of expression,” concluded the memorandum.

2 Aug 2007 - 11:04am | editor
Guwahati: Guwahati High Court on Wednesday stayed the appointment of 13,318 numbers of Anganabadi Workers in the Social Warfare Department. This would have been the biggest appointment in the second...

20 Dec 2015 - 2:54pm | AT News
The 2nd Grand Re-union of Netaji Vidyapith Railway Higher Secondary School is being organsied by the Netaji Vidyapith Alumni Association at its premises on December 26-27. Established in...

1 Aug 2012 - 3:53am | editor
Law and order seems to have improved in BTAD areas. Curfew was relaxed in Kokrajhar for two more. But night curfew continued in Chirang and Dhubri district. There was no fresh incidence of violence...