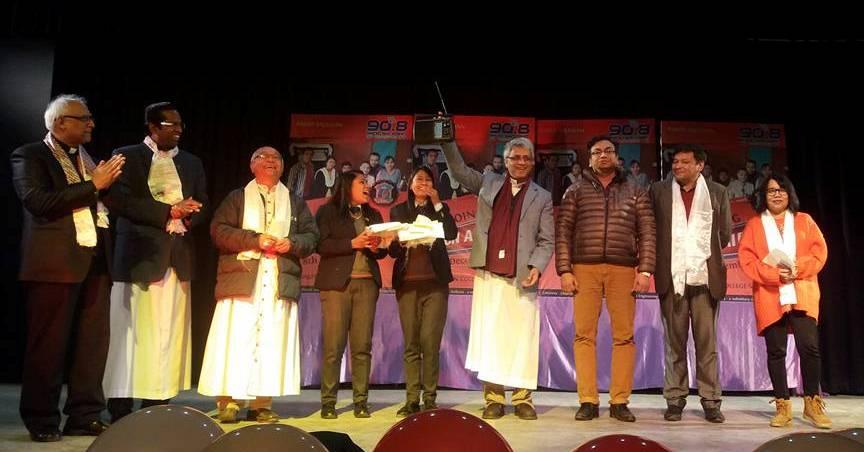 “It is indeed a proud moment for me and for the entire North Bengal University (NBU) family as we launch the first college community radio under NBU as well as entire West Bengal,” said Under Graduate Secretary of North Bengal University Dr Nupur Das speaking on behalf of NBU at the launch of Radio Salesian 90.8 FM - Voice of the Hills - at Salesian College Sonada (SCS).


Mr Chatterjee encouraged the college fraternity and its radio station “to spread social messages and bring education and hope to the masses.”


Stories Behind Music is the only English language show featured on Sunday.


“Our Community Radio broadcast is set to serve geographic and ethnic communities of the region with content that is popular, relevant and often overlooked by commercial or mass-media broadcasters,” said Principal Prof. (Fr.) George Thadathil who was relentlessly behind the radio project since June 2012.


He added, “Our students and faculty members are also committed to bring academic knowledge to the masses.”


Already some 70 students of the college conduct outreach programs in 20 youth centres every Sunday in tea gardens and villages spread out between Kurseong and Ghoom.


The web radio may be accessed on computer or mobile phone by visiting “Radio Salesian” on college website www.salesiancollege.in


Radio Salesian – Voice of the Hills is a not-for-profit venture of Kolkata Salesians was made possible by a generous grant from UGC (University Grants Commission) after Salesian College obtained the status of “College with the Potential for Excellence”.

The regular transmission of Radio Salesian 90.8 FM channel may be received live in parts of Darjeeling and Siliguri, as well as Kurseong, Mirik, Sonada, Pashupati (Nepal), Sukiapokhri, Balasun Valley and several other places.

15 Jun 2011 - 1:06am | Ritupallab Saikia
World Blood Donor Day is celebrated on June 14th every year. It is an opportunity to express gratitude to those who donate their blood in order to save lives, without expecting anything in return...