Experts Tuesday said that legislators should cease to become fund disbursing agents and assume the primary responsibility of monitoring the implementation of development schemes in their respective constituencies for an all round development of the state. They called upon legislators to study the Sustainable Development Goals (SDGs) in detail and come up with SDG-linked development strategies.

The above suggestions were made during the fourth phase of Sabal Bidhayak, a series of orientation programmes initiated by the Assam Legislative Assembly in collaboration with the Guwahati based research institute, the Centre for Development and Peace Studies. During the interactive programme, legislators expressed their dismay at the poor state of development in the Char and Tea garden areas, besides areas dominated by the Scheduled Cast and Scheduled Tribe communities.

In his address, Lok Sabha MP from Jorhat Kamakhya Prasad Tasa said, “MLAs must concentrate in monitoring development schemes in their respective constituencies and use all resources at their command to first try and understand the various schemes in operation.” He said legislators must not be dependent on bureaucrats alone, because aspirations of the people can only be fulfilled by proper implementation of the development programmes. “Ultimately, it is the elected representatives who have to be accountable and face the mandate of the masses every five years”, said Tasa. Despite Constitutional provisions, people belonging to the Scheduled Cast and Scheduled Tribe communities still suffer from lack of development because there have been no progress in many of the areas they live in. “A comprehensive study to understand the causes of the development gaps in SC and ST areas is of utmost importance”, he added.

Delivering a talk on Sustainable Development Goals, Prof. Sachin Chaturvedi, Director General of the Delhi based Research and Information System for Developing Countries, said that the Narendra Modi government is bent on involving the lawmakers in formulating development strategies of the country which are in sync with the Sustainable Development Goals. “Sustainable Development Goals target local connect and decentralised planning across many areas and hence the role of the States/Districts is extremely important”. He expressed satisfaction stating that Assam has been the first State to come up with Vision Assam 2030. Speaking on the same subject, the Northeast Regional Head of United Nations Development Programme (UNDP) John Borgoyary said that integration between various departments of the State is very important.  He called upon the legislators to identify and adopt a village or panchayat in their respective constituencies and convert them into a SDG model.

Former legislator Rafiqul Islam, said that the major problem in the Char areas in Assam are flood and erosion, large population, lack of access to education and lack of communication facilities. He suggested a land survey in the Char areas and the establishment of a separate land directorate for the Char areas. He emphasised on improving the teacher-student ratio, establishing banks, granting land to erosion-hit farmers and promoting organic farming in the Chars.

Speaking about the disparity in development in the Char and Tea garden areas of Assam, Executive Director, Rashtriya Gramin Vikas Nidhi,  Amiya Sharma said, “There is no insurance cover among 83.3 per cent of the Char area population and 74.5 per cent of the Tea garden population. The poverty rate in the Char areas is 42.6 per cent and in the Tea garden areas is 37.6 per cent against the state average of 37 per cent”, he added.  Former Principal Secretary of Bodoland Territorial Council, John Ingti Kathar, IAS (retd), also addressed the legislators on the role of lawmakers in development of SC and ST communities.
The sessions were interactive with active participation from among legislators, academics, and economists apart from civil society leaders.

27 Mar 2014 - 11:40am | AT News
A sessions court in Guwahati remanded Akhil Gogoi to judicial custody after the KMSS president was produced before it in connection with a case registered at the Khetri police station.The court,... 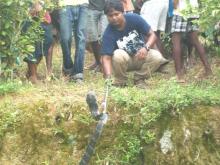