Cong, BJP gearing up for Lakhimpur by polls

Both Congress and BJP are earing up to take on each other in the upcoming Lakhimpur by polls slated for November 19.
BJP leaders in Delhi have been screening the ticket aspirants and the candidate would be finalised in a day or two.
The ruling party finds it difficult to clear the name fearing an impending split within the party. “The name of Ranjit Das has been emerging as an ideal candidate for the party. But the Speaker of the current Assam Assembly I least interested. Altogether 10 candidates have been aspiring the ticket,” said top sources.
“We have confidence that others aspirants would not revolt against the unanimous decision of the party, “said a senior BJP leader in New Delhi.
BJP president is likely to finalise the candidate in his soon to be held meeting with Prime Minister Narendra  Modi.
The Lok Sabha constituency fell vacant after Sarbananda Sonowal resigned for taking over as Assam Chief Minister in May. 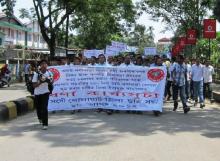 23 May 2017 - 5:55pm | AT Kokrajhar Bureau
Over 400 candidates of Diploma of Elementary Education (D .El. Ed),who are engaged teachers in LP schools staged protest demonstration in protest against shifting of examination centres to Bawanipur...