Mother Teresa was born as Agnes Bojahiu on 26th August 1910 in Skoplje, Albania will be canonize as Sainthood in Rome on 4th September. She was recognized all over the world as “Mother Teresa of Calcutta.” The nun in white Sari border with blue line, the Nobel Laureate but unto many she was a Living Saint. Born in a war torn Balkans one of the Bloodies European nationalism, Agnes Bojaxhiu became a citizen of India and an apostle to the poorest of the poor and a love that transcended beyond the border without caste, creed, gender and countries.

Mother Teresa’s extraordinary journey began with a simple “God’s Plan” and that she was merely an instrument of Divine will. These words were well documented by a biographer as she often pointed her finger upward and said, “He made the Choice.” She was honored by innumerable royals of the world, heads of the States, met four popes, pictured on numerous magazine and papers, television everywhere, throughout the world but she never lost sight of the vows of humility and poverty by serving the poorest of the poor. Her humility can be seen in her words as she describes her Nobel Prize.

Some remind me of what a magazine once said about me; it described me as a ‘living saint.’ If someone sees God in me, I am happy. I see God in everyone and especially in those who suffer.
Mother Teresa.

“The reason I was given the Nobel Prize was because of the poor. However, the prize went beyond appearances. In fact, it awakened consciences in favor of the poor all over the world. It became a sort of reminder that the poor are our brothers and sisters and those we have the duty to treat them with love.” 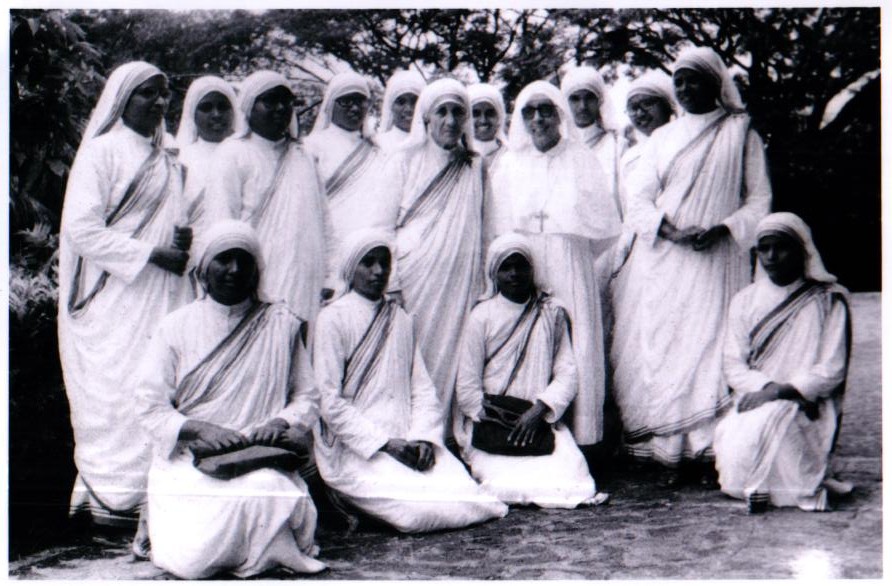 It was recorded earlier that when she heard a pair of Jesuit Missionaries from India preach in Skopje, she said later “Such beautiful descriptions about the experiences they had with the people and especially the children in India.” It was at that moment she felt her calling to work with the poorest of the poor in India. Although her vision was to help the poor and needy people she did not aspire to become a nun. Her mother was not enthusiastic about her desire to join as she was a young adolescent girl. She put aside her wishes to serve in India and continued her daily works at home. In spite of her normal day to day work her heart was captured by the stories she heard in the church group of the missionaries in India. Six years later Agnes when she was about to turn eighteen, gradually came to realize that teaching and working with the poor comprised a kind of vocation for her soon and her reluctance to become a nun disappeared entirely.

Just one month after her eighteenth birthday on September 28, 1928 Agnes boarded a train in Skopje on a long trip to Ireland, to join a three century old order of nuns- the Sisters of Loreto that sent her to teach in India forever and never to see her mother, sister and brother again. Two months later she left Ireland on a seven week journey to Calcutta (India). She arrived on January 12, 1929 an era of political turmoil where there were million rallies for Independence led by Mohandas K. Gandhi, Jawaharlal Nehru and Muslim league led by Mohammad Ali Jinnah following the dharma of Non-violence.

She taught Geography for 17 years at St. Mary’s High School for Girls. The prevailing poverty post independence had a huge impact on her mind. India’s partition into two and the displacement of millions of Civilians, tension between Hindus and Muslims and riots in the streets of Calcutta disturbed her to a great extent. She finally decided to leave the convent and start her own journey towards serving the poor, sick, homeless and dying people on the street.

Mother Teresa’s new order would serve the poor and they would live the same poverty as those they served. They would accept no government grants but take only what people gave them, each sister would own three saris, one pair of sandals and virtually nothing else. As Mother Teresa said, “This is the only way we will be in a position to share the suffering of the poor, strict poverty is our only safeguard. We do not want to happen to us what happened to other Religious orders . . . that started out serving the poor and . . . ended up serving the rich.”

The Missionaries of Charities began as a small order with twelve members in Calcutta, after getting the Approval from Pope and Mother Teresa was the head of the recognized orders of nuns. It was from that moment it started to blossom at an amazing speed and there are now more than thousands centres all over the world for orphanages, AIDS Hospices, charities centre’s, refugees, disabled, aged, poor, homeless, famine and epidemics etc with a centre based in America, Poland, Australia, Asia, Latin America etc. and Mother Teresa Missionaries of Charities has its centre in more than 100 countries.

The nuns of Missionaries of Charity took every abandoned, unwanted child and dying destitute. If her home was filled to overflowing Mother Teresa would simply open new ones. By the early 1970’s there is more than one in all the cities of India. She loved to repeat the old Calcutta Joke on the subject of Children home: “Mother Teresa does not practice family planning, everyday she has more and more children.”

Mother Teresa ripple of controversy because of her outspoken opposition to contraception and abortion did not overshadow her work as she repeated that children are a “gift from God” and cannot be unwanted. She was among those who referred to abortion as war against children. Because of her words she received many attacks. But she praised the virtues of the poor and the blessings that many children brought to families.

Mother Teresa after turning seventy years, and in India for more than fifty years her health slowly deteriorated in 1983 her heart problem escalated for a constant medical supervision and had to install a pacemaker. Many heart surgeries followed later on and Osteoporosis; a condition of decrease in bone mass that affect many fragile old people began to take toil on her body. In case of Mother Teresa the fragile did not enter her vocabulary. Even fifteen years later she continued her work as she had been doing for the last fifty years except when she was in hospital.

In March 1990, Mother Teresa resigned as Superior General of the order only to be disobeyed by her congregation who did not allow her to resign. The following year on 2nd January 1991 a countdown towards Gulf War between U.S. and U.N. forces and Iraq made her sent a personal letter to both the concerned President Saddam Hussein and President George Bush pleading for a peaceful solution instead of war. Her peacekeeping effort failed but Hussein Government invited her there to help the orphaned and the disabled after the war.

Mother Teresa’s slowly faltering health led her flitting from one hospital and one operation to another. In one of her visits to United State she was hospitalized in Los Angeles and had to undergo one more heart surgery. The same year she suffered yet another heart attack and had to be hospitalized in Mexico, yet her ministry did not diminish. Mother Teresa orders now have more than four thousand nuns operating in five hundred seventeen houses and different projects around the globe. The records in Mother Teresa for treating lepers in India alone were more than one hundred thousand in a year. It was not only based in the centre but via mobile unit as well.

In 1993 she underwent one more heart surgery when she was in Calcutta. The following years her illnesses followed till November 1996 when she complained of chest pain. Efforts were made to keep her healthy but she said, “Let me die like the poor that I serve.” Doctors were reluctant to let Mother Teresa pass away. They begged and pleaded with her. Finally in late November, she agreed to another angiography. Her severe Osteoporosis made it difficult to make a full recovery. She remained bedridden throughout the year. In the later year she said that, “I am convinced that when I am gone and if God finds a person more ignorant and useless than I he will do greater things through that person because it’s His doing.”

Few months later after she stepped down and placed her position by selection of the order to Sister Nirmala, she passed away on 5th September as one of the most Reverent and most beloved Mother of the poor, sick, destitute, dying and unwanted child. Above all her legacy of love and servitude to the poor leave a lasting impact on each and every individual. For her; serving them means serving God.

19 Dec 2017 - 11:02am | AT News
GUWAHATI: The Gauhati High Court on Wednesday will decide on the fate of Akhil Gogoi when it would be clearing the ruling on the bail petition moved by the KMSS leader who was arrested under the...

23 Mar 2017 - 9:33pm | SK Hasan
Freedom fighter, trade union leader and social worker of Nazira Benu Bhuyan breath his last at his own residence on last March 20. He was 85 and survived by his wife and son. Nazira MLA Debobrate...

4 Feb 2012 - 5:35am | Ritupallab Saikia
Golaghat Govt. Bezbarua Higher Secondary School (GGBHSS), one of the premier educational institutions of the state, has completed a glorious era of 125 years. To mark the completion of this glorious...