Violence erupts in Itanagar on Tuesday minutes after Kalikho Pul was found dead inside his residence. His supporters in large number came out to the capital streets and targeted Deputy Chief Minister Chowna Mein ransacking his official residence.

They blamed it all on Chief Minister Pema Khandu and his deputy Chow Mein for the entire incident alleging that the leader was killed indeed.

An irate mob started proceeding towards the residence of Pema Khandu. But they could not move ahead because of heave presence of security forces who have been keeping on alert.

Many local organizations have also demanded an impartial probe to unearth the details of the incident saying that he was killed and that he never committed suicide.

12 Apr 2016 - 6:35pm | AT News
An audio compact disc titled as Sangbadik (journalist) was released on 12 April 2016 at Guwahati Press Club. The CD comprises a chorus narrating the glory of journalism, which is penned by Assam’s... 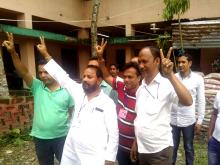 18 Feb 2015 - 12:39pm | AT News
After pulse polio, yet another immunization campaign is in place in Guwahati. It’s the Pentavalent vaccine campaign that hits the city on Wednesday. It contains five antigens being introduced under...