At a time when security forces have been trying to identify the slain militant in Balajan incident as Manjary Islary Union home minister said that the body has yet to be identified.
In a statement in Parliament on Monday home minister Rajnath Singh said that the identity of the militant, who was said to have been killed on the spot was yet to be confirmed.
“Police and security forces acted tough against the extremists and killed one of them, whose identity is yet to be ascertained," said Singh in Parliament.
The senior minister further said that the perpetrators have yet to be identified a day after Chief Minister Sarbananda Sonowal levelled an accusing finger against NDFB-S which outrightly ruled out its role in the carnage where 14 people died in militant firing and bombing. 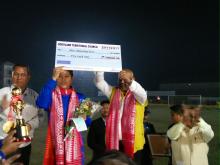 3 May 2011 - 2:09am | editor
A woman committed suicide by consuming pesticide after a petty quarrel with her husband on Monday at Wabagai Kadajit under Kakching police station in Thoubal district, police here said today...