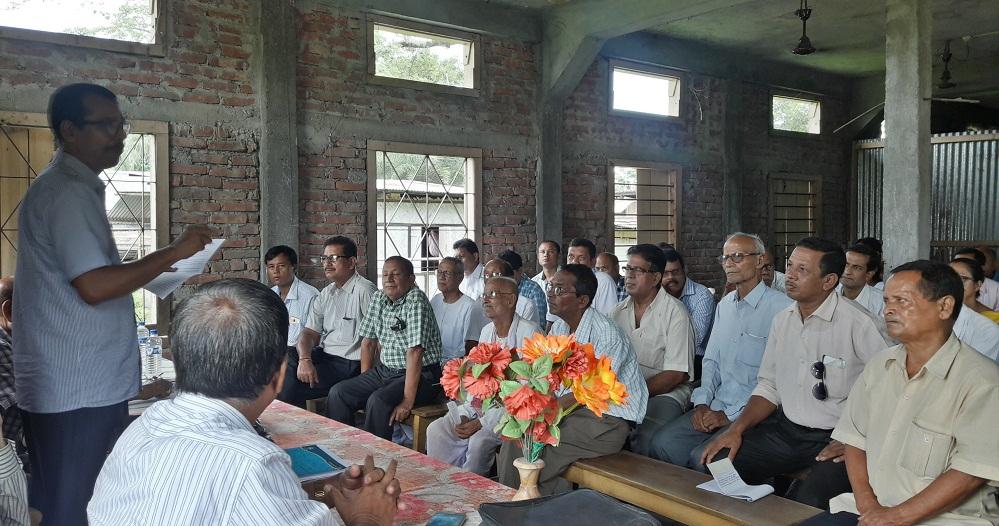 Karunadhara, a privately-run voluntary organisation has formed a Tangla regional committee in a programme held at Tangla English Medium High School premises on Sunday. The programme was presided over by Pratul Phukan working president of the charitable trust. Speaking on the ocassion Phukan observed that " Emotion,relationship and sympathy hardly finds any place in minds of people of today's society.

Helping attitude in younger generation has lost in vain, We are putting efforts to revive that among the younger generation. He further said" We have helped 900 people till date. We have distributed a fund of 2 crores 10 lakhs among needy and poverty striken people. Those include handicap, kidney transplant patients ,cancer patients among others." The trust has by this time emerged as a flag bearer of a humanitarian movement to arouse the consciousness of the people and in developing among them the urge to extend their helping hand to bring smiles on the faces of the disabled and critically ill persons in this part of the country. The response from the middle class to the appeal made by it seeking donations so as to provide financial assistance to the deserving people is quite satisfactory.

Chandra Hazarika of the trust said "The doners of our trust through 80G of Income tax can exhempt the donation amount." "Little drops of water makes the mighty ocean" is our trusts motto. Ajit Kr. Khatoniar of the trust said "Karunadhara is the "Revolution of the human heart". In the meeting a regional committee was formed by Dipak Talukdar as President ,Mahendra Bharali as Secretary.

The trust besides public fundings approaches different public and private sector banks, public sector undertakings and different private sector corporate houses for providing substantial amounts to the Karunadhara fund towards the fulfillment of their corporate social responsibility. The trust organises seminars, discussions etc.,in different parts of the State to make the people aware of the rights of the persons with disabilities as per the provisions of the country’s Persons with Disabilities (Equal opportunities, Protection of Rights and Full participation) Act, 1995.

29 Apr 2012 - 12:44pm | Anup Arandhara
One Babul Gogoi (12) died in a mishap at Santak-Gorchuk, Simoluguri on Saturday. The mishap occured when the deceased was collecting money for a Bihu Sonmilon, organised locally at Kenduguri. The...

11 Aug 2014 - 12:51pm | Dibya J Borthakur
Two persons sustained injury when a vehicle carrying them met with a mishap near Raha in Nagaon district on Monday. The mishap took place at Bagariguri at 7.30 in the morning. Identified as Moidul...