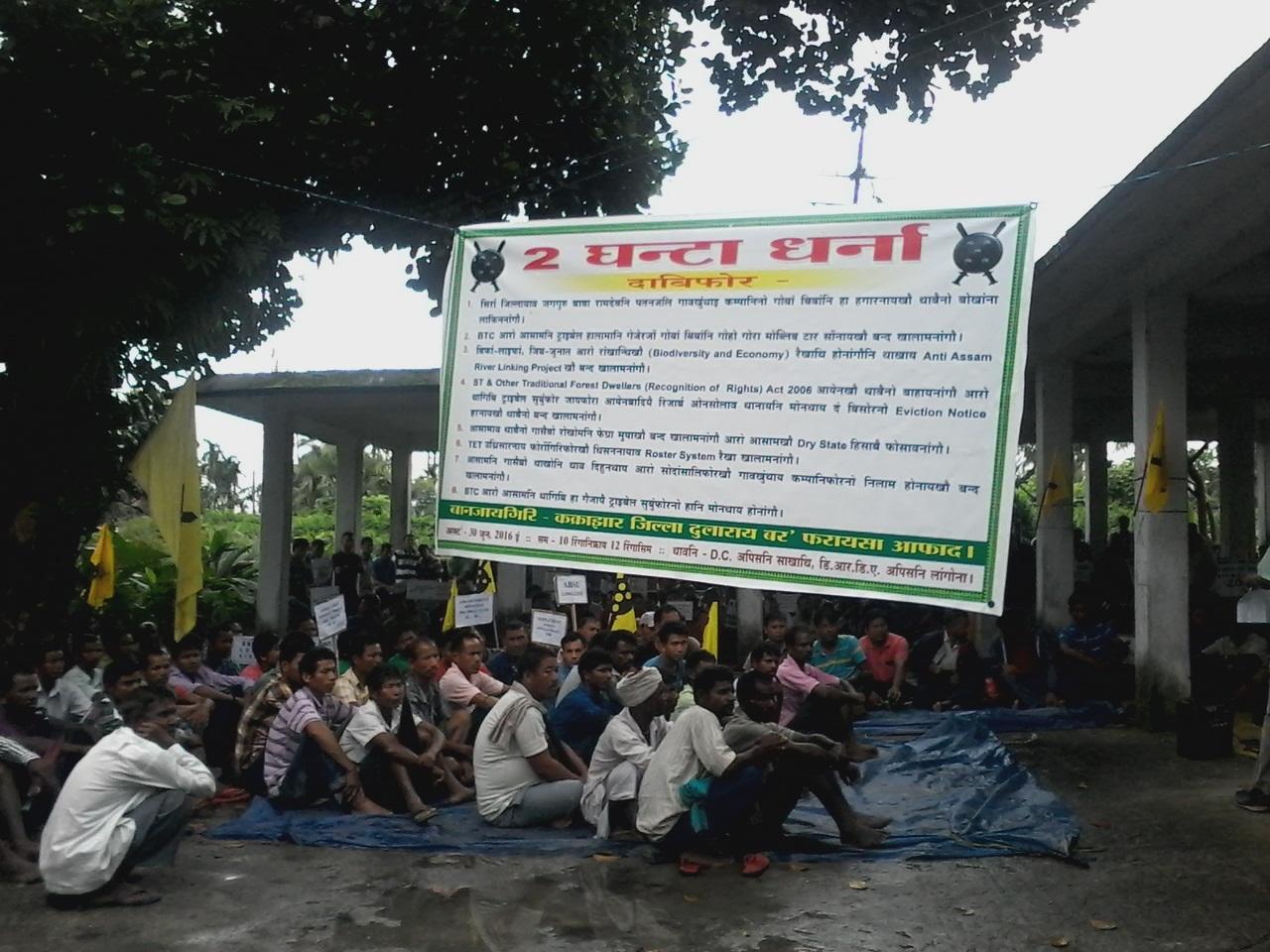 The All Bodo Students Union (ABSU) staged a 2-hours sit-in-demonstration in Kokrajhar demanding immediate solution to various problems, which included immediate cancellation land allotment to ‘Patanjali Ayurved Ltd’ a private company run by Baba Ramdev at Chirang by the BTC, stop auction of all category of Oil field to private companies.

Hundreds of ABSU activists and publics from various organizations participated in the demonstration from 10 am to 12 noon near Children park in Kokrajhar carrying placards, festoons and banners and shouting slogans, demanded immediate cancellation land allotment to ‘Patanjali.

Ayurved Ltd’, Protect Tribal Belt & Blocks and provide land rights to the landless indigenous tribal people of Assam and Control the massive Price Rise of essential commodities in Assam. A memorandum was submitted to Chief Minister and BTC Chief through Deputy Commissioner, Kokrajhar demanding early actions into demanded issue and problems. The demands included stop installation of High Voltage Electric Wire throughout the BTAD and tribal areas of northern Assam, Stop Anti Assam River Linking project to protect the Biodiversity and Indigenous economy of the state, Implement the S.T. & other traditional forest dwellers (recognition of rights) Act, 2006, and stop the eviction notice to the indigenous tribal people, who are entitled for forest rights recognition by law, Assam should be declared a dry state and ban all kinds of chewing tobacco with immediate effect, Maintain State Roster System in recruitment of TET qualified teachers, Stop Auction of all categories of Oil fields of Assam to private companies. Demanding stop installation of high voltage electric wire throughout the BTAD and northern part of Assam, the ABSU expressed much concern about the consequences of the installation of the very high voltage electric wire throughout BTAD and northern part of Assam by the Power Grid. ‘There are instances of people in the rural & tribal areas being affected by the supply of power through high power transmission bring causality of one person in Chirang by electric shock on 26 June 2016band injuring seriously eight others who are now in the hospitals. It has also become a threat to every farmer who has crop growing lands under the wire and in their homes being affected by the electric shock, the memorandum said.

On the immediately implementation of the Schedule Tribe & other traditional forest dwellers (recognition of rights) Act 2006, and stop the eviction notice to the indigenous tribal people who are entitled for forest rights recognition by law, it said it is high time that by the provision of the Law they are entitled to be recognized as Forest Dwellers with the rights of land and other facilities as per the Section 3 of the said law. ‘It is well known fact that the tribal being dependent on the foods obtainable in the forest and agricultural products from their occupied land and such a move by the authority to evict these villagers is a violation of Fundamental Rights of the Citizen, it said..

The union opined that even after repeated demands by many landless people who needs to be granted land rights, it is seen that the land and revenue department of BTC has been allotting large area of land for the outsider private company (like Patanjali Yogpeeth) at Chirang amidst the landless people who are struggling for daily livelihood.

It demanded immediate halt of issuing ‘Eviction Notice’ and harassing the indigenous forest dwelling tribes in the state. The ABSU warns to take up strong movements if the government not implements the Schedule Tribe & other traditional forest dwellers (recognition of rights) Act, 2006, within a short period of time. On the recent initiative by the state government appointing TET qualified teachers, the Union expresses displeasure for keeping aside the tribal quotas failing to maintain the roster system in appointment process. ‘This has largely kept aside the tribal youths from

employment and increased the unemployment problem. There were many vacant posts which were of reserved quota but these posts are now become extinct after the roster system of appointment process was kept aside, it said and urges the state government to maintain the state roster system in appointment to meet the problem of unemployment and minimize the problem of education in Assam. On the BJP govt step to Auction of all categories of Oil fields of Assam to private companies, the Union said that auctioning of such public sector oil fields to the private companies would be hampering the means of production and control over resources of the state. ‘The Auctioning would also be leading to the monopoly of private companies on all sorts of benefit in the public sector which is danger to the economy of the state in future, it said and demands to immediately stop the auctioning of 12 oil fields of Assam to Private Companies. ABSU also strongly urge the state government to take strong initiative to control the price rise in the state, so that the large section of middle class and poor people can have right to use all sorts of food and other essential items for their living. ABSU also feels that it is a high time for the State of Assam to declared a ‘Dry State’ and ban all sorts of chewing tobacco in state as some of the major states like Bihar and Tamilnadu has take a firm and humanitarian approach in their state to stop alcohol for the sake of the safe and sound future of the young generation and poor people of the state. Lawrence Islary,general secretary of ABSU,former MPs Urkhao Gwra Brahma,Sansuma Khunggur Bwiswmuthiary and several organization leaders participated and addressed about the demands and issues of the public facing in the region.

11 May 2015 - 3:38pm | AT News
Over 65 media persons with their spouses joined in a fresh Hepatitis B vaccination camp organized by Dispur Hospital at Guwahati Press Club on 11 May 2015. The camp started at 11 am and continued...

28 Nov 2016 - 5:23pm | AT News
The United Liberation Front of Asom (ULFA-I) has dared Union minister Rajen Gohain to make Assamese a compulsory subject in the high school level. In a statement issued by ULFA-I on Monday, chairman...

13 May 2018 - 2:31pm | Akshaya Pranab Kalita
NAMRUP: Simmering protest erupts in Namrup on Sunday when people thronged in thousands in the heart of the industrial town opposing the Citizenship (Amendment) Bill 2016 that promises Indian...