In a significant judgment to rising cases of human trafficking cases and demonstrating how seriously police and the courts will deal with people traffickers in state the Udalguri district court of Assistant Session Judge Roushan Lal sentenced two persons found guilty for their attempt of human trafficking to a term of three years and six months in jail. The judgement was pronounced on Monday last.

As per reports the duo, identified as Bina Rabha and Benershi Das, were found involved of trafficking a girl from Tangla to Haryana. The incident came to light when the All Bodo Women’s Welfare Federation spearheaded against the human traffickers an filed a FIR at Tangla police station.

The accused then underwent trial before the court of Assistant Session Judge and the duo were charged under section 370/511 IPC r/w 34 of the IPC. However, the court released the other three co-accused for the lack of sufficient evidence against them and they were acquitted of the charge.

The local court also further directed the Superintendent of Police to register a case against a Sub-Inspector, identified as Prabin Chandra Deka, in-charge of the investigating officer, for his alleged involvement to shield one of the suspects in the case. 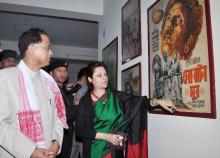 15 Feb 2011 - 8:04pm | Abdul Gani
A long nurtured dream of the film loving people of the region has finally come to life as the first ever film achieve of northeast was formally inaugurated by Assam Chief minister Tarun Gogoi in...