7 Sep 2007 - 5:35am | pbaruah
GUWAHATI: A brainstorming meeting of the Asom gana Parishad legislators on Friday will elect a new leader of the Opposition.Informing this to Assam Ttimes, senior party leaders here say the meeting... 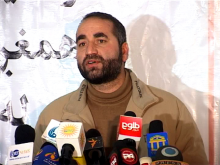 28 Feb 2019 - 9:28am | AT News
Guwahati: Senior Afghan radio journalist Abdul Mujeeb Khalvatgar will interact with member-journalists of Guwahati Press Club on 3 March at 3.30 pm. An MA in international relations, Khalvatgar is...