The efficiency of the Hagrama Mahillary led model BTC is in question in Tangla, the buisiness and education hub of Udalguri district littered with potholes on the main thoroughfares of the town. The appearance of potholes has nullified the tall claims of the much talked about Model BTC. The foundation stone of the construction of  the Interlinking Concrete Block Pavement Road from South Nalbari to Hospital Road which was layed on December 30 last year yet lies incomplete.

Local residents immensely suffer from the scattered potholes. Minor accidents are frequent especially during the monsoon with the potholes filled with rain water.
The road under Mudoibari constituency of BTC under EM Jagadish Sarkar has alloted lakhs to contractors but till date only sands have been used  to resurface the potholes which is not sufficient.
Similar is the condition of the road from Tangla charali leading to the office of the Harisinga Revenue Circle Officer. A drizzle is enough to fill up the potholes of the dilapidated road. Though local residents have raised their concern over the road, BTC authorities have turned a deaf ear to it all.
Again, the road used by school students passing through the Tangla Higher Secondary School and Sankardeva Sishu Niketan leading to Tangla Police Station and Tangla forest beat office is riddled with different sizes of potholes of varying depths. The condition aggravates every year during monsoon.

Residents of the town would find it convenient if the BTC Government under takes construction of the road in a time-bound manner.

9 Dec 2008 - 4:50pm | editor
Life in the simmering Karbi Anglong district is believe to limp back to normalcy as the KLNLF is withdrawing the indefinite rail and road blockade from Tuesday.According to information, the Karbi... 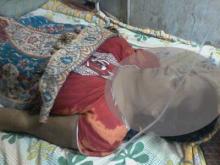 24 Sep 2016 - 9:35pm | AT Kokrajhar Bureau
A 51-year-old woman was died post gall- blooder operation at RNB civil hospital today in Kokrajhar due to wrong treatment. On the other hand, attending doctor said that operation was successfully...