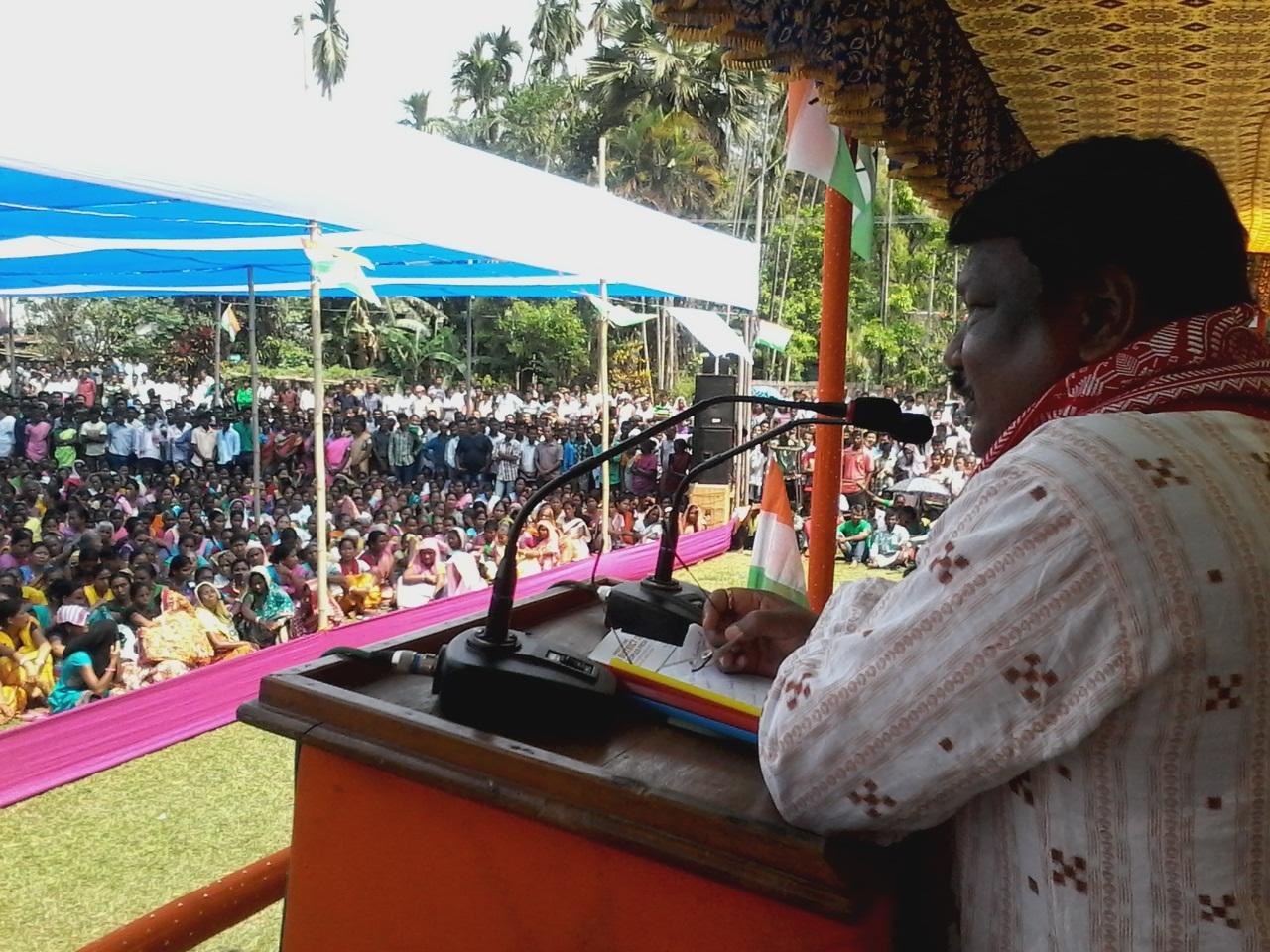 Union Minister Jual Oram has campaigned in a chartered Helicopter for alliance partner BPF candidate at Haraputa ground for 28-Gossaigaon constituency in lower Assam’s Kokrajhar on Wednesday, was accompanied BTC chief and BPF president Hagrama Mohilary and Rajya Sabha MP Biswajit Daimary. Oram addressed the campaigned in a well attended gathering said that this time BJP-BPF-AGP alliance is forming the state government in Assam as irrespective community and citizens are supporting the alliance parties. Union Minister slammed the Congress party said that the Congress in its third consecutive terms in the state has failed to fulfill hopes and aspirations of the citizens, so this time common publics are voting to the BJP and its alliance parties to meet good governance and social uplift. He has appealed to all sections of communities to vote for the BPF candidates in the scheduled election and help the parties to form government in the state.

Mohilary said that BJP led alliance party is winning over 75 seats in the assembly election and government formation is sure. He said that the exit poll announced by some agencies in the state of forming BJP led alliance government is predicting for the alliance parties for the state. He has predicted that AIUDF chief Maulana Badaruddin Ajmal can’t be Chief Minister during his presence, because AIUDF is defeating in large number of seats in the state. He said that his party was working for the all round development in the region.

‘We want early enlisted of the six ethnic communities in the ST status in the state. We have sent no objection certificate (NOC) to government to the inclusion of Scheduled Tribe (ST) for six communities of the state. He has urged Union Minister Oram to accord ST to the communities’, Mohilary said.

Jual Oram said that we (alliance parties) are forming alliance government in the state, no doubt. Congress is taking farewell from Assam as common publics are voting against them in the assembly election. The state government in Assam led by BJP alliance parties would be formed by Sarbananda Sonowal,who is Chief Ministerial candidate. We have been working to the all round development of the region through which his party and alliance partners are getting mass supports in the state.

‘I promise to implement the issue and demands raised from several organizations which included ST status to the six ethnic communities in state would be solved as soon as possible. The issue granting of ST status has been assessed through a committee was formed under the headed by special secretary for Home Affairs to accord the ST status in the state’, Oram said.

Oram on the funding pattern to district councils said that BJP led NDA government at centre was working to give direct fund to the councils so that the district council could be able to speedy up developmental and welfare activities in the region. He has alleged that Congress party never wants welfare of the common publics in their reigned, besides they have been corrupted peoples’ fund mean for public development.

Media must be responsible: Bezboruah

12 Oct 2009 - 8:32am | editor
Media must play its role with all authenticity and commitments. More over the media persons must be investigative in mind and responsible in the activities. This is how a senior Assamese journalist...

28 Nov 2017 - 6:33am | AT News Imphal
A 12-hour total shutdown on Imphal-Dimapur road, NH-2 enforced by Naga civil society groups disrupted normal life on Monday. The shutdown call from 6 am to 6 pm was imposed demanding the...