Jebraram Mushahary, chief convenor of the committee, addressing the reporters today Prasanti Lodge in Kokrajhar said that the session is organizing on March 30 and 31 with two day programme scheduled to mark the observation of the foundation day of the PJACBM, which is a plateform of separate Bodoland state within Indian territory. He said that the session will discuss about the present status of the Bodoland demand agitation where irrespective of organization, leaders are participating. He has demanded the separate Bodoland state should be created as soon as possible within Indian territory. He has appealed to all sections of communities to participate in the session.

Zong Khan Yang, president of US Hmong Boro Association, Minnesota, USA, who also attended the press conference said that the demand of separate Bodoland state would be created only through peace and unity integration among Bodos. He said that Bodos should be United and peace be prevailed in a integrated through which the demand of Bodoland could be created.

Abhoy N Jha, senior journalist, New Delhi, who is attending the session as appointed speaker said that once a day the Bodoland would be achieved through the integrated society of Bodos. He has appealed of that the pressure to the government for the separate statehood is only possible through gesturing of unity and prosperity among the Bodo and other tribes who are residing in the region.

Chief Minister Tarun Gogoi will attend the session as inaugurator of the open session.

2 Feb 2008 - 4:48am | editor
A major fire broke out in the Paltanbazar area in the city on Friday midnight which damaged properties worth crores of rupees. The accident took place while a loaded truck hit an electric post which... 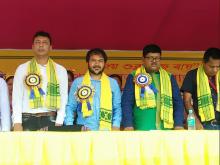