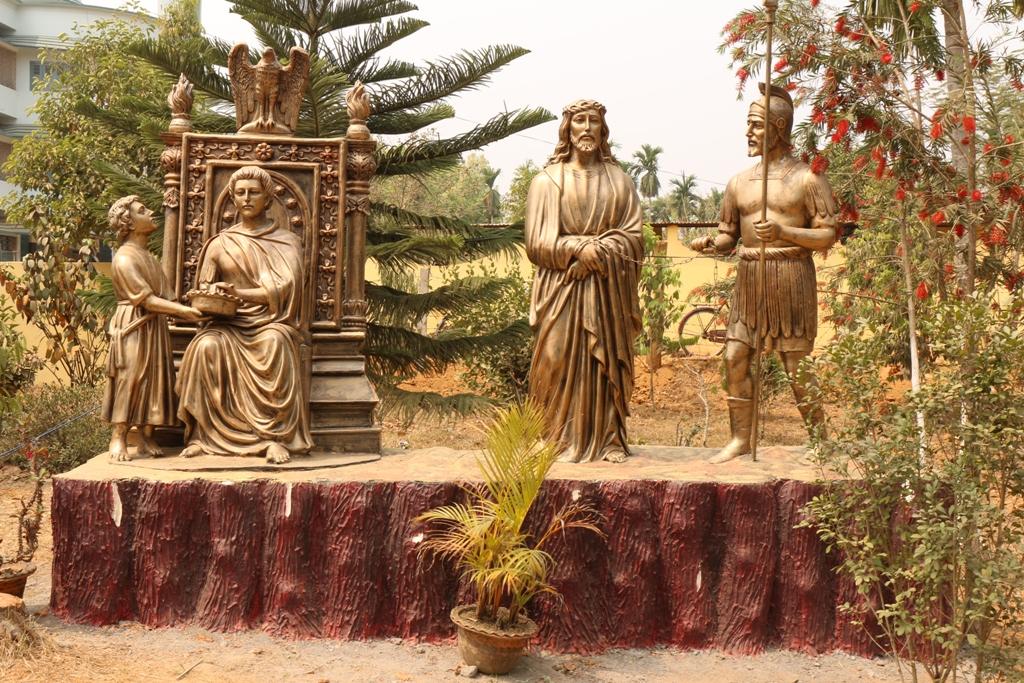 Good Friday this year was a very special occasion for Garos and Rabhas in Goalpara district of Assam. For the first time in the history of the state, the newly built St John Bosco shrine has the rare privilege of having life size Stations of the Cross called “via dolorosa’ installed for open air Good Friday services brining together communities in conflict.

In less than an year of the construction of their new Church dedicated to St John Bosco, the Garo and Rabha tribal parishioners have the 14 stations with 54 life size statues representing the final events in the life of Jesus of Nazareth.

“It is the only one of its kind open air Way of the Cross installed in Assam which has four Catholic dioceses (Bongaigaon, Dibrugarh, Guwahati and Tezpur),” says parish priest Fr Augustine Karottupuram.

“The only other church in northeast India which can boast of a similar life size open air ‘Way of the Cross’ is the cathedral church of Miao diocese in Arunachal Pradesh,” said Fr Karottupuram.

The construction of St John Bosco Church was completed for the indigenous Rabha Catholic population of Gojapara village and some 4,200 Garo Catholics of the parish spread out in 39 villages affected by Garo-Rabah conflicts a couple of years ago, sent the message of harmony between two important tribal communities of Assam ahead of Assam assembly election.

“The Garos and Rabhas now live peacefully in the area. Though the situation was tense during the conflicts, religion has brought the two communities together,” added Fr Karottupuram.

The newly installed fourteen Stations of the Cross inaugurated at the premises of St John Bosco Shrine at Gojapara in lower Assam has been tastefully and artistically executed by manufacturer Church Art Kolkata and can become a centre of attraction for visitors from the city.

Archbishop John Moolachira of Guwahati and Salesian provincial of Guwahati Fr V.M. Thomas blessed and inaugurated the Via Dolorosa (Way of the Cross) in the presence of thousands of parishioners who came from all the sub-centres of the parish to witness the historical event, 11 March 2016.

“The Via Dolorosa installed in the premises of the shrine of St John Bosco marks the saint’s 200th birth anniversary and gives opportunity to people of the region to have devotion to the Way of the Cross,” says Salesian Fr. Karottupuram.

Speaking at the occasion Fr Thomas said, “Via Dolorosa at Gojapara in the premises of St John Bosco Shrine allows the faithful to have devotion to the suffering and death of Jesus Christ. May the Lord give us all the grace to open our eyes and hearts to recognize Him and His love for us.”

Fr Thomas also invited the priests and religious from neighbouring parishes and districts who came for the blessing “to send pilgrims to the shrine during the Jubilee Year of Mercy.”

The Archbishop Moolachira declared the newly constructed church a shrine on 31 May 2015 when Salesian Vice-Provincial Fr. Januarius Sangma read the Decree declaring St John Bosco Church a shrine, in the presence of some fifty priests, religious nuns, thousands of parishioners and young people of the Parish.

`You have the most beautiful Church in the Archdiocese of Guwahati. I wish that you spend time in prayer with your family and receive graces from God here,`` the Archbishop said.

Fr Thomas thanked the many people who supported the construction of the shrine and expressed his deepest sentiments of thanks to all who helped in the building saying, “it is a dream come true for the parishioners of Gojapara that after 18 years they have a church.”

The Gojapara parish has a full-fledged School from Nursery to Class X with some 1,200 students at the centre. It has a Primary School at Hatigopa 10 km away with 200 children and another Primary School up to class II at Lemakona, 4 km away.

25 Jan 2008 - 11:43am | editor
The Union home ministry has sent a slew of instructions for the north eastern states to deal with any situation during the Republic Day celebrations in the region. These instructions ask the state...

25 Nov 2008 - 2:38am | Bikash Das
The religious Urus festivel of Dinkar Khalilar Rahman Majhar Sharif located at Dinkar under Kamalpur revenur circle in Kamrup district will be held on December 11 and 12 next with a two days long...